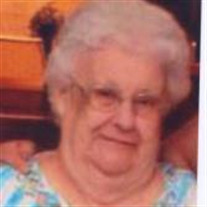 Joanne E. “Jo” Conklin, 85, of Earlville, IL passed away Wednesday, November 4, 2015. She was born February 25, 1930 in Council Bluffs, Iowa the daughter of Thornton J. and Lydia E. (Glover) Eager. She graduated from Earlville High School, in the class of 1948. She received her beautician license from LaSalle School of Beauty Culture in 1949. She married Edwin R. Conklin on April 9, 1950 in Earlville. She was a member of Immanuel Lutheran Church in Earlville, IL. Jo worked at the Manor Steak House in Earlville for 37 years as a waitress and later worked at Ted’s Red Fox until her retirement. She enjoyed bingo, golfing, playing the Lottery and most of all spending time with her grandchildren and family. She is survived by one daughter, Lisa (Chris) Heal of Chelan, WA; two grandchildren, Alex and Lauren Heal; two sisters, Bertha Stallings of Mendota, IL and Gerry (Harvey) Perkins of Earlville, IL; one brother Harry (Kathy) Eager of Earlville, IL; her sisters-in-law, Mary Lou Leonard and Kay (Roger) Cantlin; brother-in-law Larry Stillwell and several nieces and nephews. She was preceded in death by her parents, her husband Edwin, one son Russell Conklin and one sister Dorothy Duffy. Memorial services will be held at 12:00 noon, Monday, November 9, 2015 at Immanuel Lutheran Church 415 S. East St. Earlville, IL with Rev. Tammy Anderson officiating. Burial will be private in Precinct Cemetery rural Earlville. Visitation will be from 11:00 a.m., Monday, November 9, 2015 in the church until the time of services at noon. In lieu of flowers memorials may be directed to Immanuel Lutheran Church or to the family. For more information or to sign the online guest book, go to www.EighnerFuneralHomes.com Hanley-Turner-Eighner Funeral Home 407 S. Ottawa St. Earlville, IL 60518 (815) 246-6491

The family of Joanne E "Jo" Conklin created this Life Tributes page to make it easy to share your memories.

Send flowers to the Conklin family.