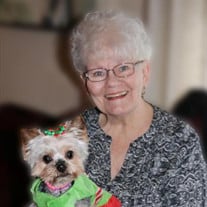 JoAnn Mary Olsen Casner - May 30, 1943 - April 23, 2020 JoAnn Casner, 76, of Somonauk, passed away Thursday morning, April 23, 2020, at her home with family by her side. She was born on May 30, 1943 in Los Angeles, CA, the daughter of Daniel and Helen (Ketola) Olsen. JoAnn was united in marriage on April 25, 1964, to Jerry (the Caz) Casner. JoAnn was a 1961 graduate of Yorkville High School, and a 1964 graduate of Copley Nursing School. Her long nursing career started at Copley Memorial Hospital in Aurora, IL. Then she served at Sandwich Hospital, and eventually retired from Dreyer Medical Clinic in Aurora. JoAnn loved family and friends dearly. She cherished every moment she could spend with them, and although she had lots of good to say, she always preferred to listen. Her sense of humor was especially allowed to shine on one of her favorite holidays - April Fool’s Day. One year, she “baked” sponge cakes for some dear friends and family members. Each excited recipient’s fork was later met by a real sponge covered in frosting. A group of beautiful and dedicated nurses JoAnn graduated with from Copley nurses’ training in 1964 call themselves “The Hens.” The Hens Club name came from the sound of cackling laughter that could always be heard when they gathered to play cards, make crafts, and share meals. They continue to meet monthly at each other's homes still to this day. JoAnn had a special place in her heart for each of the Hens. JoAnn loved watching live sports events with The Caz, and was the best cheerleader in the stands for her kids as they grew up. She loved to travel, and had many stories to tell of trips to watch NCAA Final Four basketball games, and of time spent in Germany and traveling throughout Europe with Jerry. Just like her mom Helen, JoAnn had extra compassion for animals, and the one animal who is extra grateful for this is her granddog Gracie, the little Yorkie who never left Grandma’s side. Most of all, JoAnn was known by her love for the Lord. JoAnn had an unwavering steadfast love for Jesus Christ, and she always wanted to love people the way Jesus does. She was a devoted member of Harvest Chapel in Sandwich, IL, where she spent many hours serving in the nursery, and encouraging others in small group Bible studies. She is survived by her husband of 56 years, Gerald W. Casner of Somonauk, IL; her 2 children Brad (Stephanie) Casner and Caryn (Cristian) Candia; her 2 brothers, Howard (Barb) Olsen and Robert Olsen; 2 sisters, Susan (Mike) Brown and Becky Parish; 6 grandchildren, Andrew, Nicole, Alex, Mary, Samuel and Hannah, and several great grandchildren, nieces and nephews. Preceding her in death were her parents Daniel Olsen and Helen Ketola Olsen, brother Danny Olsen, brother-in-law Ron Parish, and niece Ginger Lynn Parish. A private family graveside service will be held on Monday, April 27, 2020 at 2pm at Oak Mound Cemetery in Somonauk, with pastors Wes Bell and Derek Johnsen officiating, and arrangements made by Turner-Eighner Funeral Home in Somonauk. For more information or to sign the online guest book go to www.EighnerFuneralHomes.com Turner-Eighner Funeral Home 13160 W. RT 34 ~ Box 404 Somonauk, IL 60552 (815) 498-2363

The family of JoAnn Mary Olsen Casner created this Life Tributes page to make it easy to share your memories.

Send flowers to the Casner family.