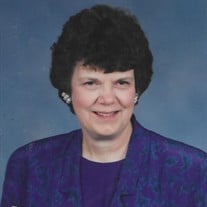 Joan E. Norton (née Harmon), 87, of Sugar Grove, IL passed away Saturday, September 26, 2020 at home in Sugar Grove. She was born November 10, 1932 in Utica, IL, the daughter of Thomas and Elizabeth Harmon (née Donahue). She grew up and spent most of her life in Earlville, IL. She married John E. “Jack” Norton on June 20, 1953 in Earlville at St. Theresa Catholic Church, where she was an active parishioner since childhood. She is preceded in death by her parents, husband, daughter Mary, sisters Donna Schrecengost (née Harmon) and Marilyn Payne (née Harmon), and by her brother Robert Harmon. She is survived by her brother Thomas Harmon of Clearlake, CA; her children Thomas (Susan) Norton, Carol Stream, IL; Julia Norton, Mesa, AZ; Mary Beth Norton, Milwaukee, WI; Jane (Febronio) Norton, Chicago, IL; Margaret (Duane) Norton-Rosko, Sugar Grove, IL; Joseph (Nikole) Norton, Chicago, IL; eighteen grandchildren; two step-grandchildren; and seven great grandchildren. A member of Earlville High School’s graduating class of 1950, she was a straight-A student in every year of school. However, college was not within her family’s reach, so she continued as a member of the local workforce. Beginning at age 13 as a pinsetter at Earlville’s bowling alley, she worked the rest of her life until retirement, including both part- and full-time work as she raised her family. Among her employers were the Earlville Leader Newspaper, where she began dating future husband Jack, Babcock Insurance Agency, R & H Supermarket, One Stop Foods (later Red Fox Supermarket), and retired from Pioneer State Bank (aka National Bank of Earlville). Her life revolved around her faith, her marriage, her children, her extended family, her work, and later in life, her grandchildren, traveling the Midwest to support them in their academic, musical, and athletic endeavors. She especially loved the trips she took around the U.S. with her children and grandchildren and as the guest of her brother Bob on trips to New York, Ireland, and Rome. Known by all as an exceptionally kind, giving, and loving person, she will be missed dearly by her family and friends. May she rest in peace. Visitation will take place at St. Theresa Catholic Church, 215 W. Union St, Earlville, IL, 60518, on Saturday, October 3rd from 9-11 am, with a Rosary at 10:30 and two musical selections offered in tribute by her grandchildren. The Funeral Mass will begin at 11 am, with Rev. Jean Tayoro officiating. Followed by burial at St. Theresa Catholic Cemetery in Earlville. Protective Masks are required in the church building and seating for Mass will be limited to maintain safe distancing. In lieu of flowers, kindly consider a gift in her memory to the Earlville Library District, the Earlville Community Historical Society, Earlville High School, or to the Alzheimer’s Association. For more information or to sign our online guest book please go to www.EighnerFuneralHomes.com Hanley-Turner-Eighner Funeral Home 407 S. Ottawa St Earlville, Illinois 60518 (815) 246-6491

Joan E. Norton (née Harmon), 87, of Sugar Grove, IL passed away Saturday, September 26, 2020 at home in Sugar Grove. She was born November 10, 1932 in Utica, IL, the daughter of Thomas and Elizabeth Harmon (née Donahue). She grew up and... View Obituary & Service Information

The family of Joan E. Norton created this Life Tributes page to make it easy to share your memories.

Send flowers to the Norton family.