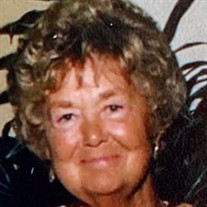 Joan C. Dobnick, 87, of Sandwich, IL passed away Monday, August 23, 2021 at Northwestern Medicine Valley West Hospital in Sandwich, IL. She was born January 26, 1934 in Aurora, IL the daughter of A. Cleon and Helen Marie (Livingston) Miller. She married her high school sweetheart, Robert Dobnick on December 6, 1952 in Rockford, IL. Joan was an avid golfer, bridge player, and enjoyed macrame. She would always be cheering her grandsons on at every sporting event. Joan’s greatest love of all was spending time with her family, especially her grandchildren and great-grandchildren. She is survived by one daughter Deborah (Bruce) Hartman of Sandwich, IL, one son Daniel Dobnick of Sandwich, IL; three grandson’s Ryan (Jessica) Hartman of Marseilles, IL, Josh (Cassie) Hartman of Sandwich, IL, and Brandon (Colleen) Dobnick of Stamford, VT; five great-grandchildren Natalie, Nadia, Charlotte, Chase, and Konstantine. She was preceded in death by her husband Robert Dobnick, her parent’s A. Cleon and Helen Marie Miller, and one sister Shirley Peterson. Graveside Services will be held at a later date. In lieu of flowers, memorials may be directed to the charity of one’s choice. For more information, or to sign the online guest book, please go to www.EighnerFuneralHomes.com Burkhart-Eighner Funeral Home 606 E. Arnold Rd Sandwich, IL (815) 786-2165

The family of Joan C. Dobnick created this Life Tributes page to make it easy to share your memories.

Send flowers to the Dobnick family.