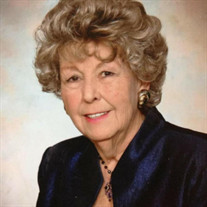 Joan Pauline Beniushis, 89, of Shabbona, IL passed away Thursday, February 4, 2021 at her son’s home in Somonauk, IL. She was born July 5, 1931 in Aurora, IL the daughter of Willard and Katherine (Cox) Ferson. She was a graduate of Madonna High School in Aurora. She was active in the Red Hat Ladies Society. Joan enjoyed gardening, had a passion for music and enjoyed traveling. Most of all she loved spending time with her grandchildren. She is survived by four sons, Jon McGuane of Shabbona, IL, Gary McGuane of DeKalb, IL, Scott (Holly) McGuane of Lewisville, TX, and Craig McGuane of Somonauk, IL; nine grandchildren, nineteen great grandchildren, numerous nieces, nephews, a special cousin, Constance Ryan, and numerous cousins. She was preceded in death by her parents, her husband Alben Beniushis, one son Patrick McGuane, one sister Kathleen Koenig, and two Brothers, Clifford and Donald Ferson. Funeral Service will be held at 1:00 p.m., Sunday, February 7, 2021 at Turner-Eighner Funeral Home in Somonauk, IL, with Father Kevin Butler officiating. Burial will be at a later date in Mt. Olivet Cemetery in Aurora, IL. Visitation will be from 11:00 a.m. until the service at 1:00 p.m. in the funeral home. Memorials may be directed to The Wounded Warrior Project or the charity of one’s choice. For more information or to sign the online guest book go to www.EighnerFuneralHomes.com Turner-Eighner Funeral Home 13160 W. RT 34 ~ Box 404 Somonauk, IL 60552 9*15) 498-2363

Joan Pauline Beniushis, 89, of Shabbona, IL passed away Thursday, February 4, 2021 at her son&#8217;s home in Somonauk, IL. She was born July 5, 1931 in Aurora, IL the daughter of Willard and Katherine (Cox) Ferson. She was a graduate... View Obituary & Service Information

The family of Joan Pauline Beniushis created this Life Tributes page to make it easy to share your memories.

Send flowers to the Beniushis family.