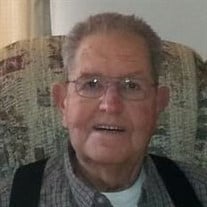 Jimmy E. Long, 74, of Somonauk, Illinois passed away Saturday, November 24, 2018 in Rush-Copley Medical Center in Aurora, IL. He was born November 3, 1944 in Vandalia, IL the son of Edward and Maggie (Bedford) Long. He married Carol A. Dubiel on July 14, 1965 in Ramsey, IL. He was a member of Harvest Chapel in Sandwich, IL, and UAW Local #145 of Aurora, IL. Jimmy was employed at Caterpillar in Aurora, IL for 30 years retiring in April 1, 1999. He designed and built his own home. He enjoyed woodworking, and n scale train collecting. But most of all he loved spending time with his family. He is survived by his wife Carol of Somonauk; his children, Theresa (Dan) Gordon of Sandwich, IL, and Richard (Daryl) Long of Somonauk, IL; ten grandchildren, Daniel (Tayler), Sarah (Jakob), Timothy, Joshua, Ian, Christopher, Jennifer, Caitlyn (Alex), Jamie (Lance), and Alexander; two great grandchildren, Benjamin and James due in March; two sisters, Ollie Auton and Marie Davis, both of Ramsey, IL, and several nieces and nephews. He was preceded in death by his parents, two brothers and one sister. Funeral services will be held 11:00 a.m. Friday, November 30, 2018 at Turner-Eighner Funeral Home in Somonauk, IL, with Pastor Derek Johnsen officiating. Burial will follow in Little Indian Creek Cemetery rural Leland, IL. Visitation will be from 9:00 a.m., Friday, November 30, 2018 in the funeral home until the time of services at 11:00 a.m. In Lieu of flowers memorials may be directed to Polycystic Kidney Disease. For more information or to sign the online guest book go to www.EighnerFuneralHomes.com Turner-Eighner Funeral Home 13160 W. RT 34 ~ Box 404 Somonauk, Illinois 60552 (815) 498-2363

The family of Jimmy E. Long created this Life Tributes page to make it easy to share your memories.

Send flowers to the Long family.