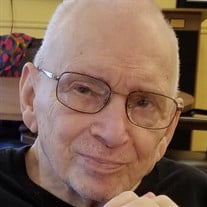 Jim Anderson, Jr. 80, of Plano, formerly of Sandwich, IL, passed away Monday, December 30, 2019 at Kishwaukee Hospital in DeKalb, IL. He was born March 4, 1939 in Sterling, IL, the son of James R. and Maud (Figeley) Anderson. He served four years in the US Navy, and then graduated from NIU in 1965. He married Martha “Marty” Rakow on August 31, 1963 in Dundee, IL. Jim was a member of the National Accounting Association. He enjoyed drum corps, golf, and football, especially the Bears and NIU Huskies. Most of all, Jim loved spending time reading and playing with his grandson, Nic. He is survived by his wife of 56 years, Martha of Plano, IL; two children, Michelle (Everett) Benson and Mike Anderson both of Plano, IL; one grandson, Nicholas Benson; his siblings, Barbara Anderson-Bark of Sugarland, TX and Bill (Mitze) Anderson of Jonesborough, TN; his brother-in-law, Steven (Ruth) Rakow of Aurora, IL; many nieces, nephews, cousins, and friends. He was preceded in death by his parents. Graveside service will be held at a later date. For more information or to sign the online guest book, go to www.EighnerFuneralHomes.com Turner-Eighner Funeral Home 3952 Turner Ave. Plano, IL 605445 630-552-3022

The family of Jim Anderson Jr. created this Life Tributes page to make it easy to share your memories.

Send flowers to the Anderson family.