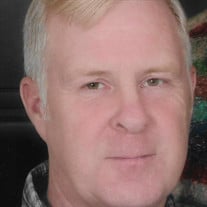 Jerry R. Shaw, 74, of Somonauk, IL. went home to be with the Lord on Sunday, September 26, 2021 at OSF St. Joseph Medical Center in Bloomington, IL. He was born August 29, 1947 in Sandwich, IL. the son of George B. and Mattie E. (Bland) Shaw. He married Deanna Lynne Austill on February 12, 1972 in Somonauk, IL. The two were inseparable in life and are now forever together in eternity. Jerry was a proud veteran of the US Air Force where he served as a helicopter hoist & sling operator and mechanic. He was a member of Waterman Bible Church and was known by all for his kindness, generosity, and self-sacrificing service to others. Jerry loved restoring and showing his antique trucks and was a member of the American Truck Historical Society, Northwest Illinois Chapter. He was a lifelong resident of Somonauk and enjoyed sharing stories of the ‘good ol’ days. He could be regularly found sharing a meal with one of his numerous friends, but his greatest love of all was spending time with his family. He is survived by two children Amanda (Brad) Cummings of Somonauk, IL and Micah (Juleigh) Shaw of Travelers Rest, SC; seven grandchildren, Trenton, Madison, Evan, Myleigh, Clayton, Jaden, and Jeremiah, one sister Janet Shaw of Williamsburg, VA. He was preceded in death by his parents, George and Mattie Shaw, his wife Deanna Lynne and a brother in infancy, George Alan Shaw. Memorial Service will be held at 3:00 p.m. on Saturday, October 23, 2021 at Somonauk Baptist Church in Somonauk, IL. Visitation will be from 11:00 a.m. to 2:30 p.m. on Saturday, October 23, 2021 at Somonauk Baptist Church in Somonauk, IL. The visitation and memorial service will be held in the church gymnasium. In lieu of flowers, memorials may be directed to Waterman Bible Church. For more information, or to sign the online guestbook, please go to www.EighnerFuneralHomes.com Turner-Eighner Funeral Home 13160 Rt 34 W ~ P O Box 404 Somonauk, IL 60552 (815) 498-2363

The family of Jerry Shaw created this Life Tributes page to make it easy to share your memories.

Send flowers to the Shaw family.