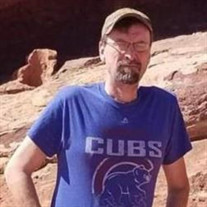 Jeffrey Wayne Enlow, 51, passed away December 17, 2021, at his home in Elgin, Iowa. Jeff was born February 20, 1970 to Bobby and Vanga (Adams) Enlow in Aurora Illinois. Jeff attended Plano School District. He enjoyed being in the band and he excelled at playing the trumpet. He later went on to graduate from Plano High School. Jeff enjoyed playing baseball, softball, and bowling. Most weekends he would be playing pool with his friends. He would even have a beer or two while spending time with his friends. He was also a very loyal fan of the Chicago Cubs and the Pittsburg Steelers. He wanted to be just like his father so he too joined the Masonic Sunbeam Lodge #428, in Plano, Illinois. He was employed at Rupp Captive Aire in West Union, Iowa. He is survived by mother, Vanga (Frank Hill) Enlow; sister Deborah (Rich Anderson) Couch; two brothers, Mike (Amy) Enlow, and John (Kristy) Enlow; Nieces, Jennifer (Jared) Ostrom, Kaitlyn McCoy, Audrey (Sara Gerlach) Enlow, and one nephew, Parker Enlow; Great nieces, Kailey Ostrom, Hannah Ostrom, and Emma Enlow; One great nephew Austin Enlow. He is preceded in death by his father, Bobby Enlow, and a niece, Heather Green. Visitation will be from 3:00 to 6:00 p.m. on Monday, March 28, 2022, with a Memorial Service at 6:00 p.m.at Turner-Eighner Funeral Home in Plano, with Pastor Stevan Saunders officiating. Burial of his urn will be at 10:00 a.m., Tuesday, March 29, 2022 at Lincoln Memorial Park in Aurora, Illinois. For more information or to sign the online guest book go to www.EighnerFuneralHomes.com Turner-Eighner Funeral Home & Crematory 3952 Turner Avenue Plano, Illinois 60545 (630) 552-3022

Jeffrey Wayne Enlow, 51, passed away December 17, 2021, at his home in Elgin, Iowa. Jeff was born February 20, 1970 to Bobby and Vanga (Adams) Enlow in Aurora Illinois. Jeff attended Plano School District. He enjoyed being in the... View Obituary & Service Information

The family of Jeffrey Wayne Enlow created this Life Tributes page to make it easy to share your memories.

Send flowers to the Enlow family.