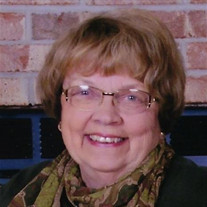 Jean M. Banks, 82, of Sandwich, IL, passed away Thursday, March 7, 2019. She was born January 10, 1937 in Decatur, IL, the daughter of William and Louise (Grathwohl) Schalla. She married Lester E. Banks on December 26, 1970 in Moline, IL. Jean started out her nursing career in 1958 in the Quad Cities, then continued her career at Copley Hospital in Aurora, IL., with her final place of work being a Transplant Nurse at Met Life where she retired in 1992. She was a member of Moline Lutheran Church and later became a member of the United Methodist Church of Sandwich. She was a member of the Speedy Fillies Organization. Jean enjoyed watching horse racing and Hallmark movies. She was a creative painter, enjoyed reading a good book, had a great love for Christmas which lead to her collecting Santa Clauses. She made sure her Sandwich Fair toothpick holder collection was always up to date. She was a longtime owner of Standard Bred race horses. Jean’s greatest love of all was the time she spent with her family and her dog Sophie which will miss her tremendously. She is survived by her husband, Les of IL; her children, Rodney (Leesa) Banks of IL, Jay (Linda) Leonard of MI, Scott Banks of FL, Gay (George) Leonard-Jahad of CA, Rhonda (Lonnie) Newton of IN, Frank (MaryBeth) Banks of MI, Jody (Ronda) Leonard of IL and Raymond Banks of TX; her brother, William (Julie) Schalla of GA; her brother-in-law, Dwight (Teri) Banks of IL; twelve grandchildren, Glenn, Catie, Bekky, Andy, Jared, Leslie, Randee, Sheila, John, Cassandra, Julia, and Becky; nineteen great grandchildren, Garrit, Emitt, Wyitt, Hailey, Tyler, Kayla, Annah, Ryan, Ruthee, Payton, Haley, McKenna, Robbie, MaryJo, Frankie, Sammy, Gavin, Elsie, and Charlotte; many nieces, nephews, cousins, and friends. She was preceded in death by her parents and one daughter, Patty Banks. Funeral Service will be held at 5:00 p.m. on Sunday, March 10, 2019 at Turner-Eighner Funeral Home in Somonauk with Pastor Steven Mindrup, and Pastor Leon McClimans officiating. Eulogy will be given by Jean’s cousin Don Banks. Visitation will be from 2:00 p.m. until the time of service at 5:00 p.m. on Sunday, March 10, 2019 at the funeral home in Somonauk. Graveside service will be held at 10:30 a.m. on Monday, March 11, 2019 at Flora Cemetery in Cherry Valley, IL. Memorials may be directed to Divine Hospice in Yorkville, IL. For more information or to sign the online guest book, go to www.EighnerFuneralHomes.com Turner-Eighner Funeral Home 13160 Rt 34 W ~ PO Box Somonauk, IL 60552 815-498-2363

The family of Jean M. Banks created this Life Tributes page to make it easy to share your memories.

Send flowers to the Banks family.