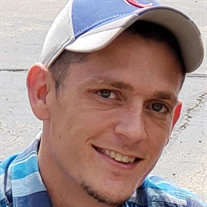 James A. “Jake” Warren, 35, of Somonauk, IL. passed away Tuesday, January 4, 2022 at his home. He was born August 25, 1986 in Aurora, IL the son of James E. and Cindy L. (White) Warren. He married Megan Burnett on December 30, 2011 in Las Vegas, NV. He loved hunting, fishing, and taking road trips with his family. He also enjoyed hiking, boat rides, deep sea fishing and the great outdoors. He loved taking his girls shopping and most of all he loved spending time with his family. He is survived by his wife Megan; his two daughters, Lexie, and Melanie; his father James (Mishelle) Warren of Plano, IL; his loving mother, Cindy (deceased) and step-father Andy Wihr "Grandpa" of Old Fort, TN; four siblings, Elizabeth (Joel) Williamson and daughter Ava of Kansas City, KS., Jennifer Schattke and her children, Leah, Charlotte, Ivy, and Ava of Yorkville, IL., Anthony (Haley) Warren and children, Audrey, Everett, of Temecula, CA. and McKenzie Warren of Plano, IL; his Grandma Betty Warren of Plano, IL, Grandparents Shelia and John Holbo of TN, and Grandparents Pat and Chuck Simpkins of Oswego, IL; his father-in-law and mother-in-law Curt and Cindy Burnett of Earlville, IL.; several aunts, uncles, and family members. He was preceded in death by his loving mother Cindy whom he will be together with again in Heaven and his grandfather James “Ed” Warren, and Grandfather William White. Funeral services will be held at 12:00 p.m. on Tuesday, January 11, 2022 at Turner-Eighner Funeral Home in Somonauk, IL with Rev. Chris Schoon officiating. Visitation will be held from 11:00 a.m. until service at 12:00 p.m. on January 11, 2022 at the Turner-Eighner Funeral Home in Somonauk, IL. Memorials may be directed to the family. For more information or to sign the online guestbook please go to www.EighnerFuneralHomes.com Turner-Eighner Funeral Homes 13160 W. Rt. 34 -P.O. Box 404 Somonauk, Il 60552 (815) 498-2363

The family of James A. "Jake" Warren created this Life Tributes page to make it easy to share your memories.

Send flowers to the Warren family.