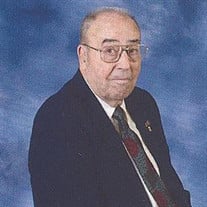 Howard H. Gast, 92, a lifelong resident of Earlville, IL passed away Thursday, March 7, 2019 at OSF St. Anthony Medical Center in Rockford, IL, as the result of injuries sustained in an automobile accident. He was born September 21, 1926 in rural Earlville on the family farm. After graduating from high school he enlisted in the Army Air Corps during WWII. Howard married Marilyn A. Meinke on October 20, 1945 at Langley Field in Virginia. He was one of the few who was discharged from the Army Air Corps and was reenlisted in the newly formed US Air Force. When he was discharged from the US Air Force he came home to farm east of Earlville; and was a primary individual in the start up of the Clearview Airport on the farm. Clearview Airport invested in 3 airplanes, all of which crashed. He was known as the pilot who crashed into the second floor of the Weidner house rural Earlville and lived to tell about it. Over 100 people learned to fly at Clearview Airport. He continued to have a passion for flying, later owning a plane with two friends flying often. He was a longtime farmer in Earlville and was well known at the Chicago Stockyards, proud of the beef he fed. Howard was a lifelong member of the Immanuel Lutheran Church in Earlville, where he served as president on the church council. Howard was a member of the Earlville Country Club, the Earlville American Legion, where he was previously Commander, was on the LaSalle Veteran’s Home Board, the Earlville Lions Club, and the Illinois Valley Horseman Association, where he enjoyed going on many trail rides. He is survived by one son, Mark (Cindi) Gast of Coal Valley, IL; one daughter, Laurie (Joseph) Vitale of Las Vegas, NV; one granddaughter, Joanne (Steve) Lenzie of Las Vegas, NV; five sisters, Dolores Kaminky of Earlville, IL, Jean (Frank) Holmes of Rockford, IL, Wilma Lee Johnson of North Hatfield, MA, Karen (Royce) Kreul of Oregon, WI, and Cynthia (Bob) Kreiser of Mendota, IL; numerous nieces and nephews. He was preceded in death by his parents, his wife Marilyn in 2007, one brother Harold J. Gast, two sisters Dona Mae and Ramona. Memorial Services will be held at 12:00 noon on Saturday, May 18, 2019 at Immanuel Lutheran Church, 415 S. East St. in Earlville, IL, with Rev. Tammy Anderson officiating. Burial of his urn will follow in Precinct Cemetery rural Earlville. A celebration of his life will be from 10:00 a.m., on Saturday, May 18, 2019 at the church until the time of services at noon. In Lieu of flowers Memorials may be directed to the Earlville American Legion, Immanuel Lutheran Church, or the Earlville Historical Society. Arrangements were entrusted to Hanley-Turner-Eighner Funeral Home in Earlville, IL. For more information or to sign the online guest book go to www.EighnerFuneralHomes.com Hanley-Turner-Eighner Funeral Home 407 S. Ottawa St. ~ Box 808 Earlville, IL 60518 (815) 246-6491

Howard H. Gast, 92, a lifelong resident of Earlville, IL passed away Thursday, March 7, 2019 at OSF St. Anthony Medical Center in Rockford, IL, as the result of injuries sustained in an automobile accident. He was born September 21, 1926... View Obituary & Service Information

The family of Howard H. Gast created this Life Tributes page to make it easy to share your memories.

Send flowers to the Gast family.