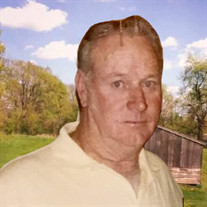 Harvey H. McCoy, 77, of Byron, IL, passed away Saturday, February 2, 2019 at Serenity House in Oregon, IL, surrounded by his loving family. He was born September 12, 1941 in Greene County, TN, the son of Bud and Elva (Evans) McCoy. He married Diana Wright on June 8, 1961 in Morristown, TN. Harvey retired after 47 years of service from Asplundh Tree Service, where he was a crew leader. He was a member of the IBEW Local 9 for 47 years. Harvey and Diana loved to travel to Texas, after his retirement. He enjoyed growing many things in his garden and sharing the bounty. Harvey was extremely devoted to his children and grandchildren. He is survived by his children, Robert McCoy of Stillman Valley, IL, Dawn (Anthony) Hendrickson of Byron, IL, and Deborah (Jeffrey) Harper of Chana, IL; ten grandchildren, Brandon and Emily children of Robert, Joshua, Meghan, Sarah and Olivia children of Dawn and Stephen, Aaron, Ashley and Nichole children of Deborah; seven great grandchildren, Samuel, Elise, Owen, Sophia, Gideon, Myra, and Troy; his siblings, Junior (Evelyn) McCoy of Rockford, IL, Catherine (Tommy) Oler of Whitesburg, TN, and George (Franell) McCoy of Morristown, TN; his sister-in-law, Cheri (Larry) Back of Kissimmee, FL; numerous nieces, nephews, and cousins. He was preceded in death by his parents, his wife, two sisters, Edith and Ruth, and two brothers, Arlee and Guy. Funeral Service will be held at 1:00 p.m. on Thursday, February 7, 2019 Immanuel Lutheran Church in Earlville, IL, with Rev. George McCoy officiating. Burial will follow at Precinct Cemetery in Earlville. Visitation will be from 11:00 a.m. until the time of service at 1:00 p.m. on Thursday, February 7, 2019 at the church. Memorials may be directed to the family. For more information or to sign the online guest book, go to www.EighnerFuneralHomes.com Hanley-Turner-Eighner Funeral Home 407 S. Ottawa St. Earlville, IL 60518 815-246-6491

Harvey H. McCoy, 77, of Byron, IL, passed away Saturday, February 2, 2019 at Serenity House in Oregon, IL, surrounded by his loving family. He was born September 12, 1941 in Greene County, TN, the son of Bud and Elva (Evans) McCoy. He... View Obituary & Service Information

The family of Harvey H. McCoy created this Life Tributes page to make it easy to share your memories.

Send flowers to the McCoy family.