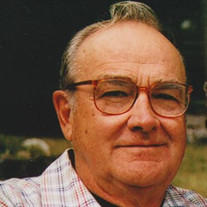 Harlan D. Wiley, age 92, of Yorkville, IL passed away on Tuesday, September 11, 2018 at Hillside Rehab and Care in Yorkville, IL. He was born October 23, 1925 in Sandwich, IL. He was the son of Walter and Lenora Wiley. Harlan was united in marriage on September 11, 1949 at the Plano United Methodist Church in Plano, IL to Shirley E. Meier. They celebrated 64 loving years together before Shirley passed in 2014. Harlan passed away on their 69th wedding anniversary. He was a caring husband, father, grandfather, and great-grandfather who will be deeply missed by his family. Harlan graduated from Plano High School in 1944 before enlisting in the U.S. Army Air Force Aviation Pilot Training program during WWII. Upon discharge, he attended Southern Illinois University. He was a member of the Plano American Legion Post 395 for over 50 years. He served as a volunteer fireman for the Bristol-Kendall Fire Department for over 30 years. He was a member of Trinity Church United Methodist in Yorkville, IL. He worked for the family-owned Bronze & Steel Die Casting Co. in Plano, MTH Tool and Die, and Caterpillar Inc. He and Shirley enjoyed spending summers at their family cabin on High Lake in Wisconsin, the same lake they spent their honeymoon. He was an enthusiastic fisherman and loved his Cubs, Bulls, and Bears. Harlan is survived by his three daughters, Vicki (Larry) Skaggs of Henderson, NV, Sarah Wiley of Yorkville, IL, and Joan (Ken) Damron of Marseilles, IL; his grandchildren, Don (Gail) Damron of Ottawa, IL, Brian Caywood of Las Vegas, NV, and Dave (Theresa) Damron of Marseilles, IL; and his great-grandchildren, Drew and Ella Damron, Kayla, Kendall, and Kyle Caywood, and Henry Damron. He is preceded in death by his wife, Shirley; his parents, Walter and Lenora Wiley; and three brothers, Keith, Ronald, and Gerald. Private funeral services will be held at a later date at the Turner-Eighner Funeral Home in Plano, IL with interment in the Little Rock Township Cemetery in Plano, IL. For more information or to sign the online guest book go to www.EighnerFuneralHomes.com Turner-Eighner Funeral Home 3952 Turner Ave. Plano, IL 60545 (630) 552-3022

Harlan D. Wiley, age 92, of Yorkville, IL passed away on Tuesday, September 11, 2018 at Hillside Rehab and Care in Yorkville, IL. He was born October 23, 1925 in Sandwich, IL. He was the son of Walter and Lenora Wiley. Harlan was... View Obituary & Service Information

The family of Harlan D. Wiley created this Life Tributes page to make it easy to share your memories.

Send flowers to the Wiley family.