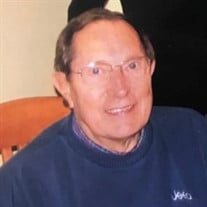 Gordon B. Lowery, 90, Watuaga, TX, passed away peacefully in his home February 27, 2020. He was born November 16, 1929 in Ottawa, Illinois to Richard and Blanche Lowery. He is survived by his sister Beverly Fisher, wife, Dorothy Monroe Lowery, children Natali (Scott) Ehrhart, Jean (Bret) Phillips, Dyann (Matthew) Lundberg, grandchildren Jennifer (Dave) Heubel, Tasha Bumgarner, Brittany (Stephan) Schaeper, Luke Phillips, Letah Lundberg, Colton Phillips, and Miles Lundberg, great grandchildren Tyler Houser, Emma Lee Houser, Noah Heubel, and Lilabeth Skodachek and nephews Timothy (Bertha) Fisher, Matthew and Andrew Lindenbaum and nieces Mary Lindenbaum and Cheryl Fisher and their families. He was preceded in death by his brother-in-law Harry Fisher, granddaughter Bethany Gosnell, and nephew Robert Fisher. Gordon and Dorothy met in 1950 and married on October 18, 1952. Gordon bravely served his country in the Korean War as a medic in the Army 3rd Infantry Division. Following his service in the Army, Gordon operated his own businesses in auto body repair and outdoor sport vehicle sales for many years. He was a multi-talented musician and played the drums and violin in a band when he was young. He enjoyed the outdoors and spent a lot of time with his family boating and snowmobiling. He later worked in auto sales until his retirement at age 78. Following his retirement he and Dorothy moved to the Fort Worth, TX area to be near family. Gordon was a loving, giving, and caring husband, father, grandfather, and great-grandfather that lived a very long and full life. He was generally a quiet, selfless man that was adored by many. He had a dry sense of humor that would often catch friends and loved ones off guard. He was committed to his strong Lutheran faith and loved spending time with family and friends. He enjoyed participating in reunion groups with other veterans. He was an active member of the Outpost Harry Survivors Association, 3rd Infantry Division, Audie Murphy Outpost #35 and the Korean War Veterans Association, Chapter 215 of Texas. He was a very strong and hardworking man who fought through numerous health issues late in his life. He insisted on getting his driver’s license renewed at age 90 while recovering from a broken hip. He strolled into the DMV with a walker and an oxygen tank sporting his beloved Korean War veteran baseball cap and strolled out with a valid license and a smile on his face. In lieu of flowers, please donate in Gordon’s name to the Korean War Veterans Association, Chapter 215, General Walton H. Walker, Texas. Visitation: Friday, March 6, 2020, 4-7pm Burkhart-Eighner Funeral Home, Sandwich, IL Funeral: Saturday, March 7, 2020, 10am Salem Lutheran Church, Sandwich, IL, with Rev. Wayne Derber officiating. Internment following funeral at Oakwood Memorial Park, Ottawa, IL. For more information or to sign the online guest book go to www.EighnerFuneralHomes.com Burkhart-Eighner Funeral Home 606 E. Arnold Road Sandwich, IL 60548 (815) 786-2165

Gordon B. Lowery, 90, Watuaga, TX, passed away peacefully in his home February 27, 2020. He was born November 16, 1929 in Ottawa, Illinois to Richard and Blanche Lowery. He is survived by his sister Beverly Fisher, wife, Dorothy... View Obituary & Service Information

The family of Gordon B. Lowery created this Life Tributes page to make it easy to share your memories.

Send flowers to the Lowery family.