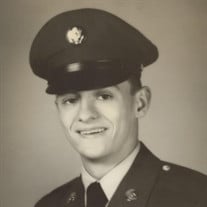 Gilbert “Gil” Krause, 75, of Plano, IL passed away Wednesday, April 8, 2020 at Rush-Copley Medical Center in Aurora, IL. He was born October 25, 1944 in Elmhurst, IL, the son of Jerry and Philomine (Stibley) Krause. He married Shirley I. Torkelson on February 12, 1972 in Plano, IL. Gil was a proud member of the US Army Green Beret, serving from 1962 to 1965. He was also a member of the Sandwich Moose and the Cedardell Country Club. Gil was a proud Union Carpenter from 1965 and retired in 2000, he built many homes throughout the area. He enjoyed bowling, golf, and an avid Chicago Cubs fan. Most of all, Gil loved spending time with his family. He is survived by his wife, Shirley of Plano, IL; his son, Dean (Denise) Krause of Plano, IL; two grandchildren, Tyler (Maria) Krause of Henderson, NV and Mitchell (Hannah) Krause of Lemont, IL; one great granddaughter, Isabella and a great granddaughter on her way; his brother, Lynn (Kay) Krause of Fort Myer, FL; his three kitties, Tabitha, Pewe, and Mama Cat; many nieces, nephews, cousins, and friends. He was preceded in death by his parents and three brothers, Loren, Gaylen, and Gary. A Celebration of Gil’s life will be held at a later day. For more information or to sign the online guest book, go to www.EighnerFuneralHomes.com Turner-Eighner Funeral Home 3952 Turner Ave. Plano, IL 60545 630-552-3022

The family of Gilbert "Gil" Krause created this Life Tributes page to make it easy to share your memories.

Send flowers to the Krause family.