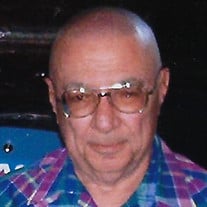 Gerald "Jerry" Zimmerman, 85, of Earlville, IL passed away Wednesday, October 3, 2018 at Hines VA Hospice Facility in Hines, IL. He was born January 26, 1933 in Earlville, IL the son of Paul and Ruth (Lutz) Zimmerman. He was a member of St. Theresa Catholic Church in Earlville, IL. Jerry graduated from Quincy College in 1956. He was a proud veteran of the U.S. Air Force serving during the Korean War and was stationed in Texas. Before retiring he was a teacher in a Catholic School in Chicago. Jerry liked to walk and visit with the residents of Earlville. On a normal day you could see Jerry with his walker and his reflective vest going down Ottawa St. to Casey’s to get a paper, visit with the staff, and get food for his cat. Jerry had chosen to generously donated his body to Science to help train future Doctor’s. He is survived by one son Michael Zimmerman of Chicago; one brother George Ted (Jane) Zimmerman of Earlville, IL; and several nieces and nephews. He was preceded in death by his parents, one daughter, Therese, and one sister, Patricia Appleton. Memorial Mass will be held 10:00 a.m., Wednesday, October 10, 2018 at St, Theresa Catholic Church 221 W. Union St. Earlville, IL, with Rev. Augustin Kassa officiating. In Lieu of flowers memorials may be directed to Masses or to St. Theresa Catholic Church. Visitation will be from 9:00 a.m., Wednesday, October 10, 2018 in the church until the time of the Mass at 10:00 a.m. Arrangements were entrusted to Hanley-Turner-Eighner Funeral Home in Earlville, IL. For more information or to sign the online guest book go to www.EighnerFuneralHomes.com Hanley-Turner-Eighner Funeral Home 407 S. Ottawa Street Box 808 Earlville, IL 60518 (815) 246-6491

Gerald "Jerry" Zimmerman, 85, of Earlville, IL passed away Wednesday, October 3, 2018 at Hines VA Hospice Facility in Hines, IL. He was born January 26, 1933 in Earlville, IL the son of Paul and Ruth (Lutz) Zimmerman. He was a member of... View Obituary & Service Information

The family of Gerald "Jerry" J. Zimmerman created this Life Tributes page to make it easy to share your memories.

Send flowers to the Zimmerman family.