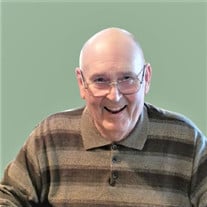 Gerald Lewis Cook, 84, of Sandwich passed away November 17, 2021 at his home surrounded by his loving family. He was born October 25, 1937 to Lewis and Marjorie (Moore) Cook. He was united in marriage to his high school sweetheart, Marlene (McCollum) Cook on August 10, 1957. In addition to his wife, he is survived by a son, Timothy (Cinthia) Cook and a daughter, Kristin (Bob) Calvert; Eight grandchildren, Beverly (Todd) Schrader, Matthew (Sarah) Cook, Andrew (Patricia) Cook, Allison (Ryan) Wayman, Justin (Marissa) Stofferahn, Ryan (Shauna) Stofferahn, Eric (Danielle) Bedford, and Katelyn (Matt) Sosolik; Fifteen great grandchildren, Landon, Logan and Lane Schrader, Garett, Griffin and Grant Cook, Neil and Myles Cook, Adalyn Wayman, Freddy and Verity Stofferahn, Braylee, Lakelynn and McKenna Bedford and Waylen Sosolik; A sister, Sandra (Michael) McCarthy, and many cousins and nieces. He was a devoted and loving husband, father, grandfather and great grandfather. He built the house that he and his wife have lived in for 51 years. He was the kind of man that would give you the shirt off of his back if you needed it. He will be greatly missed. He was the founder and owner of Colonial Kitchen & Bath Cabinetry, Inc. in Sandwich. A business that he took great pride in. He was a longtime member of the United Church of Sandwich. He served on many committees at the church, also The Log Cabin Fair Stand. He was given an honor of service award from the church. The most important thing in his life was his family. He loved attending his grandchildren’s and great grandchildren’s ball games, sporting events, and activities. He was preceded in death by his parents, a daughter, Patti Stofferahn and a grandson, Daniel Bedford. A visitation will be held at The United Church of Sandwich 512 E. Lions Rd. in Sandwich, IL on Monday, November 22nd from 10 a.m. to 2:00 p.m. Funeral services will be held at the United Church of Sandwich on Monday, November 22nd immediately following the visitation with Pastor Tom Bourke officiating. Interment will follow at Oak Mound Cemetery, Somonauk. The family would like to thank all of the caregivers from Kind Companions 4 You that took care of our dad/grandpa/great grandpa. They truly became part of our family. The family would also like to thank Unity Hospice for their care of our dad/grandpa/great grandpa. In lieu of flowers, memorials may be directed to the United Church of Sandwich or The Open Door Rehabilitation Center of Sandwich. For more information or to sign the online guest book go to www.EighnerFuneralHomes.com Turner-Eighner Funeral Home 13160 W. RT34 ~ Box 404 Somonauk, IL 60552 (815) 498-2363

Gerald Lewis Cook, 84, of Sandwich passed away November 17, 2021 at his home surrounded by his loving family. He was born October 25, 1937 to Lewis and Marjorie (Moore) Cook. He was united in marriage to his high school sweetheart, Marlene... View Obituary & Service Information

The family of Gerald "Jerry" Lewis Cook created this Life Tributes page to make it easy to share your memories.

Send flowers to the Cook family.