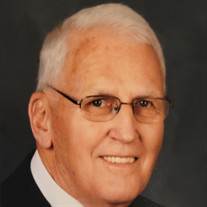 Gerald (Jerry) Casner, 81, of Somonauk, IL passed away Friday morning, December 17, 2021, at his home with family by his side. He was born on May 25, 1940, in Sandwich, IL, the son of Wilbur and Luetta (Hainline) Casner. Jerry was united in marriage on April 25, 1964, to his wife JoAnn Casner. Jerry was a 1958 graduate of Sandwich High School. Jerry was drafted into the United States Army in 1960 and served as a Military Policeman. Jerry was a jack-of-all-trades, working odd jobs from carpentry, furniture repair to painting. Jerry managed Idle Hour Lanes in Sandwich, IL for over 28 years until his retirement in 2005. Jerry’s life revolved around family and sports. He and his wife loved to travel, especially around the country to attend the NCAA Final Four basketball games. He enjoyed family dinners and get-togethers over the holidays. His nickname was “Mr. Goodcookie” at Christmastime after making and delivering dozens of cookies to family and friends. Jerry was a champion when it came to the Somonauk Memorial Day Cakewalk every year, winning multiple cakes for his family to enjoy. He also enjoyed Wiffle ball tournaments in the back yard and playing in bags tournaments. He loved watching sports just as much as playing them. He would attend his grandchildren’s sports games through their school years. Jerry was a huge fan of the Chicago Cubs and celebrated all of 2016 for their long-awaited World Series win. Jerry also had a love for golf, teaching his children how to play and later his grandchildren. Jerry enjoyed playing golf with his friends in the Moose League for over 10 years which included much trash talk on who the better golfer was. When it wasn’t golf season, Cut-throat Caz would play pinochle or poker every chance he got. Jerry was a competitor at heart. He is survived by his children Brad (Stephanie) and Caryn (Cristian) Candia; 7 grandchildren, Andrew, Nicole, Alex, Mary, Samuel, Hannah, and Diego, and several great grandchildren, nieces, and nephews. Preceding him in death were his parents Wilbur Casner and Luetta Casner, brother Harold Casner, and his late wife of 56 years, JoAnn Casner. A private family graveside service was held on Monday, December 20, 2021 at Oak Mound Cemetery in Somonauk, with arrangements made by Turner-Eighner Funeral Home in Somonauk. Jerry would like any donations to go to the Chicago Cubs, to hire better general managers, or to the Open Door in Sandwich. For more information or to sign the online guest book go to www.EighnerFuneralHomes.com. Turner-Eighner Funeral Home 13160 W. RT 234 ~ Box 404 Somonauk, 60552 (815) 498-2363

Gerald (Jerry) Casner, 81, of Somonauk, IL passed away Friday morning, December 17, 2021, at his home with family by his side. He was born on May 25, 1940, in Sandwich, IL, the son of Wilbur and Luetta (Hainline) Casner. Jerry was united in... View Obituary & Service Information

The family of Gerald "Jerry" Casner created this Life Tributes page to make it easy to share your memories.

Send flowers to the Casner family.