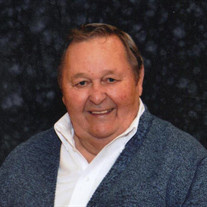 George M. Durbin, 84, of Earlville passed away Friday, December 6, 2019 at his home, surrounded by his loving family. He was born September 5, 1935 in Bement, IL, the son of Joseph Elwood and Marjorie Ruth (McKenzie) Durbin. He married Patricia A. Hickey on September 15, 1956 in Huntley, IL. George was a member of St. Theresa’s Catholic Church. He served in the US Navy from 1955 to 1957. George retired from Caterpillar after working 49 years and operated a consulting business for management and quality. George also farmed and raised cattle for many years. Not only was George a member of the Earlville Lion Club, where he was a past president, he was also a past president of the Lions of IL Foundation, and the Lions of IL Past District Governors Association. He was a Trustee for the Lions of IL Foundation and served as the State Secretary. George has received numerous awards from Lions International and Lions of IL for his service. He is also one of the founders of the Earlville Excellence in Education Foundation Board, where he was a President. George volunteered at the school district with the Generation Exchange group. He was on the school board for 18 years. He is survived by his wife, Patricia of Earlville, IL; his children, Gerald Durbin of Pingree Grove, IL, Terry (Sandy Murtaugh) Durbin of Earlville, IL, and Diana (Tommy) Mimbs of Yorkville, IL; seven grandchildren; five great grandchildren; his sister, Betty Sawicki of Earlville, IL; several nieces, nephews, and friends. He was preceded by his parents, his sister, Faye Sandberg, one brother, Ray in infancy, his great nephew, Dalton Ambler, and his brothers-in-law, Don Sawicki and Ronald Hickey. Funeral Mass will be held at 10:00 a.m. on Friday, December 13, 2019 at St. Theresa Catholic Church in Earlville, with Father Augustin Kassa officiating. Burial will follow at Precinct Cemetery in Earlville. Visitation will be from 3:00 p.m. to 7:00 p.m. on Thursday, December 12, 2019 at the Catholic Church in Earlville. In lieu of flowers, memorials may be directed to St. Theresa Catholic Church, the Earlville Lions Helping Hands, or the Foundation for Excellence in Education. For more information or to sign the online guest book, go to www.EighnerFuneralHomes.com Hanley-Turner-Eighner Funeral Home 407 S. Ottawa St. ~ PO Box 808 Earlville, IL 60518 815-246-6491

George M. Durbin, 84, of Earlville passed away Friday, December 6, 2019 at his home, surrounded by his loving family. He was born September 5, 1935 in Bement, IL, the son of Joseph Elwood and Marjorie Ruth (McKenzie) Durbin. He married... View Obituary & Service Information

The family of George M. Durbin created this Life Tributes page to make it easy to share your memories.

Send flowers to the Durbin family.