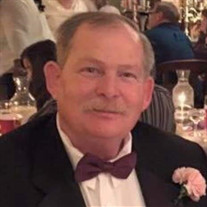 Gary L. Heth, 64, of Leland, IL passed away Wednesday, January 8, 2020 at Valley West Hospital in Sandwich, IL surrounded by his loving family. He was born September 6, 1955 in Aurora, IL the son of Charles and Mildred (Bonnin) Heth. He married Marcia K. Brown on April 12, 1975 in Aurora, IL. Gary worked for Elgin Industries in Elgin, IL. He enjoyed camping, was a die- hard Bears Fan. Most of all he enjoyed spending time with his family. He is survived by his wife Marcia; his children, Stacy Heth, her twin, Stephanie (Daryll) Adams, and Jeffrey Heth; five grandchildren, Ashley, Chad, Alanna, Sara, and Bailey; three great grandchildren, Rowan, Miami, Rhyson, and one more due in May; and several nieces and nephews. He was preceded in death by his parents, one daughter Susan Heth, and three brothers. A celebration of his life will be held from 1:00 to 3:00 p.m., Saturday, January 11, 2020 at Turner-Eighner Funeral Home in Somonauk, IL. For more information or to sign the online guest book go to www.EighnerFuneralHomes.com Turner-Eighner Funeral Home 13160 W. RT 34 ~ Box 404 Somonauk, IL 60552 (815) 498-2363

The family of Gary L. Heth created this Life Tributes page to make it easy to share your memories.

Send flowers to the Heth family.