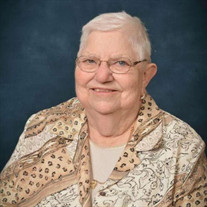 Elsie Janet VanTassel Anderson Ness, 87, of Yorkville, IL passed away Sunday, September 19, 2021 at Rush-Copley Medical Center in Aurora, IL. She was born March 30, 1934 in Charleston, IL the daughter of Ivan and Loretta (Tipsword) VanTassel. Her mother passed away before Janet’s fourth birthday. She was cared for by her dad, sister, brother, grandparents, and many loving relatives. They lived in Charleston, IL and Greenup, IL until she was nine when her dad married Kathryn Hutton. At the time the family moved to Sheridan, IL. She married Delmar Anderson on December 27, 1952 and together loved and raised Becky, Lorrie, Rich, and Russ. She graduated from Copley Memorial school in 1971 and enjoyed thirty-three years of nursing. Delmar Anderson passed away June 21, 1983 and Janet moved to Yorkville, IL, where she resided for many years. She acquired Michelle Rodriguez as a patient, but she soon became one of the family. She was re-acquainted with Harvey Ness and they were married November 28, 1991. They loved camping, fishing, traveling, and blue grass music. He passed away June 12, 2006. Her children and stepchildren took very good care of them She is survived by her two daughters, Becky (Jim) Wilson of Winona, MN and Lorrie (Dale Barringer) Robbins of Yorkville, IL, two sons, Rich (Lisa) Anderson of Yorkville, IL and Russ (Chris) Anderson of Sheridan, IL; six grandchildren, Chad (Jen) Anderson and their children Zach and Lane, Ken (Kim) Robbins and their children Laci and Emily, Kevin (Donnii) Martinez, Valerie Roberton (deceased) and her children Mariya and Dannika, Lindsey (Kiel Pennington) Anderson and their children Landon and Ainsley, and Amber Wilson, one brother, JR (Patsy) VanTassel, brother-in-law Rev. Robert Dennis of Minnesota, sister-in-law Betty Anderson; and several nieces and nephews. She was preceded in death by her parents, Ivan and Loretta VanTassel, two spouses, one stepmother, one sister, one brother, one granddaughter, three sisters-in-law, five brothers-in-law, and four infant grandchildren. Funeral Services will be held at 11:00 a.m. on Thursday, September 23, 2021 at Turner-Eighner Funeral Home in Plano, IL. Private Family Graveside Service will follow at Helmar Cemetery in Newark, IL. Visitation will be from 10:00 a.m. to 11:00 a.m. on Thursday, September 23, 2021 at Turner-Eighner Funeral Home in Plano, IL. In lieu of flowers, memorials may be directed to the charity of one’s choice. Elsie’s family would like to thank the staff at Rush-Copley for their excellent care. For more information or to sign the online guest book please go to www.EighnerFuneralHomes.com Turner-Eighner Funeral Home 3952 Turner Ave Plano, IL 60545 (630) 552- 3022

The family of Elsie Janet VanTassel Anderson Ness created this Life Tributes page to make it easy to share your memories.