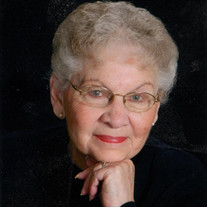 Elizabeth “Betty” Louise Jelm, 89, of Somonauk, IL, passed away November 7, 2020 at the Villas of Hollybrook in Bloomington, IL. She was born June 22, 1931, and raised in Alexandria, VA. The daughter of John P. & Evelyn (Vickers) McDermott. She married Doyle W. Jelm on February 6, 1954. They were happily married, until Doyle sadly passed away on November 7, 2006. She was a member of Valley West Community Hospital and the American Postal Workers Union for many years. She was a part of the Naval Aviation Ordnance Test Station in Chincoteague, VA. In 1998, she retired from the United States Postal Services where she worked at in Serena, IL and Leland, IL. She is survived by her daughter Cheryl Powell; son-in-law Marvin Gudeman; grandson Brett (Brynn) Gudeman; great grandson Brayden; grandson Marcus (Jody) Gudeman; and nieces and nephews. She was preceded in death by her parents; her brother John Vickers McDermott; her son David Jelm; and her daughter Karen Gudeman. Private graveside service will be held at Section Cemetery in Marseilles, IL on Friday, November 13, 2020 with Pastor Chris Schoon officiating. In lieu of flowers, memorials may be directed to St. John’s Lutheran Church in Somonauk, IL, in Elizabeth’s name. For more information, or to sign the online guest book, please go to www.EighnerFuneralHomes.com Turner-Eighner Funeral Homes 13160 Rt 34 W ~ P O Box 404 Somonauk, IL 60552 (815) 498-2363

The family of Elizabeth Louise Jelm created this Life Tributes page to make it easy to share your memories.

Send flowers to the Jelm family.