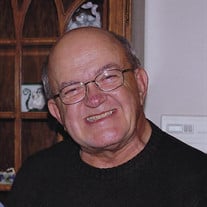 Edward D. Hall, 73, Of Sandwich, Illinois passed away, Saturday, July 13, 2019 at his home. He was born November 14, 1945 in Kansas City, KS the son of Glenn W. and Cleetus Cleo (O’Connor) Hall. He married Marsha L. Spannagel on February 28, 2013 in Yorkville, IL. Ed was a member of Harvest Chapel in Sandwich, IL. He was a proud veteran of the U.S. Army, having served in Vietnam. Ed enjoyed golf and talking about firearms. He was a loving, giving, kind man that will be miss by all. He is survived by his wife, Marsha of Sandwich, IL; one step-daughter, Melanie (Mike) Tackett of Avilla, IN; two grandchildren, Devin (Elizabeth) Perkins of Rome City, IN and Austin Perkins of Avilla, IN; one great grandson, Harley; his aunt, Kay (Gene) Floyd of El Dorado, MO; his cousin, Judy (Richard) Wendel of Independence, MO; special friends, Wayne and Donna Vantine and family, Tracy McClure, Derek Johnsen, Roger and Samantha Smith, and family. He was preceded in death by his parents and many aunts and uncles. Memorial Services will be held 5:00 p.m. on Sunday, July 21, 2019 at Turner-Eighner Funeral Home in Somonauk, with Pastor Derek Johnsen officiating. Visitation will be from 2:00 p.m. until the time of service at 5:00 p.m. at the funeral home in Somonauk in Somonauk. Memorials may be directed to Harvest Chapel or the charity of your choice. For more information or to sign the online guest book go to www.EighnerFuneralHomes.com Turner-Eighner Funeral Home 13160 Rt 34 W ~ PO Box 404 Somonauk, IL 60552 (815) 498-2363

The family of Edward D. Hall created this Life Tributes page to make it easy to share your memories.

Send flowers to the Hall family.