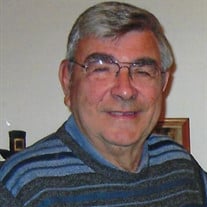 Donald Jesse “Don” Hash, 83, of Somonauk, IL passed away on Thursday, April 23, 2020 at his residence surrounded by his loving family. Don was born in Aurora, IL on July 20, 1936, the son of Walter and Laura (Grandgeorge) Hash. Don grew up in Somonauk and graduated from Somonauk High School with the class of 1954. In 1951, Doris Munson and Wayne Fitzpatrick brought Don into the Humpty Dumpty Ice Cream Shop in Sandwich to meet Doris’ sister, Patricia Munson, who worked there. Don, at the time a sophomore in high school, invited Patricia, a freshman, to meet him at the State Theater in Sandwich. Pat says, “That’s all it took.” Don and Patricia were married on November 7, 1958 by Rev. Leonard Johnson at Our Savior’s Lutheran Church in Sandwich. Following his high school graduation, Don worked for Federal Huber in Plano for many years. After it was sold, Don formed Plano Metal Specialties along with several other former Federal Huber Employees. Later, Don worked for Imperial Marble in Somonauk until his retirement. Don was an avid Chicago Bulls and Chicago White Sox fan. Don loved fishing and enjoyed many family vacations at Cornucopia, WI, Campbellsville, KY, and Ten Mile Lake in Minnesota. Don was an active member of the Union Congregational Church in Somonauk, serving as both a deacon and trustee. For many years, Don delivered Meals on Wheels for Fox Valley Older Adults Services. Don loved Sheltie dogs, and had several through the years, with the last one, “Rusty”, being at his side throughout Don’s final illness. Don lovingly cared for his parents and aunts and uncles for many years and could always be counted on by them. Don had an especially close relationship with his only sibling, Gene. Don’s greatest love was his family, and he always looked after and worried about his wife, children, and grandchildren. Whenever Don was asked what he wanted for dessert, he would teasingly respond “Boysenberry Pie”…. his daughters finally granted that wish on his 80th birthday when they had his waitress surprise him with a whole pie! Don could always be counted on for a joke or a friendly smile and wave, he will be deeply missed by many people. Don is survived by his wife of 61 years, Patricia; four daughters, Laureen (Keith) Johnson of Somonauk, IL, Gail (Jim) Schluter of Sandwich, IL, Chris (Dennis) Hoff of Bloomington, IL, and Ginger ( Brad Meyer) Sharp of Plainfield, IL; four grandchildren, Doni (Tonya Garcia) Hash of Sandwich, IL, Jessica (Jay) Kuehlem of Somonauk, IL, Karlie Sharp and Brooke Sharp of Plainfield, IL; three great-grandchildren, Jenna and Johnny Kuehlem of Somonauk, IL and River Hash of Sandwich, IL; his sister-in-law, Marge Hash of Sandwich; brother-in-law, Wayne (Dorothy) Knights of Plover, WI, and many nieces and nephews. Don is preceded in death by his parents, Walter and Laura Hash; his brother, Gene Hash, on April 16, 2020; and many aunts, uncles, and close relatives. Don’s family would like to thank the staff at Mayo Clinic, especially Dr. Hossein Gharib, who cared for Don for many years, Dr. Janota and staff, and the staff at Journey Care for all they have done for Don during his time of illness. Due to current circumstances visitation and memorial service will be held at a later date. Memorials may be directed to Union Congregational Church, 305 S. Gage St P O Box 275 Somonauk, IL 60552. Arrangements were entrusted to Turner-Eighner Funeral Home. For more information or to sign the online guest book go to www.EighnerFuneralHomes.com Turner-Eighner Funeral Home 13160 Rt 34 W ~ P O Box 404 Somonauk, IL 60552 (815) 498-2363

The family of Donald Jesse "Don" Hash created this Life Tributes page to make it easy to share your memories.

Send flowers to the Hash family.