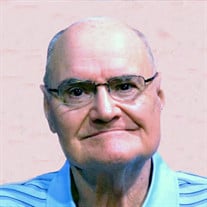 Donald (Don) Lee Henry, 80, of Sandwich, IL, passed away on August 8, 2020 at his home surrounded by his family. He was born on February 14, 1940 in Oak Park, IL the son of Elmer Ellsworth Henry Jr. and Grace Marie (Ryan) Henry. He married Geraldine Reese on June 22, 1974 in Wilmington, IL. Don served in the Army Reserve from 1962-1968. He served as a telecommunications technician for Ameritech (Illinois Bell) for more than 30 years until he retired in 1994. Don then went to work for Caterpillar in Joliet, until he officially retired in 2007. Donald loved listening to classical music, watching old movies, in his younger year’s woodworking, and his most recent hobby of photography/videography. He and his twin brother were two peas in a pod; they enlisted in the Army Reserves together, worked for the same companies, enjoyed the same hobbies, and even built the exact same house. Donald is survived by his wife, Geraldine, his children, Christy (Jeff) Pruski of Sandwich, Cindy (Dan) Riley of Oro Valley, AZ, Jeff (Jenny) Henry of Lebanon, OH; his twin brother William Henry of Coal City, IL, 8 grandchildren and several nieces and nephews. He was preceded in death by his father, Elmer Henry, his mother Grace Henry, his brother-in-law William Reese and sister-in-law, Lois Hengstler. Visitation will be on Tuesday, August 11th from 5:00 p.m. to 7:30 p.m. at Turner-Eighner Funeral Home, Somonauk. Funeral Service will be held on Wednesday, August 12th at 10:30 a.m., at Turner-Eighner Funeral Home in Somonauk, with Reverend Bernie Sehr officiating. Burial will follow at Oak Ridge Cemetery in Sandwich, with Military Honors by Plano American Legion. In Lieu of flowers, memorials may be directed to Fox Valley Older Adults Services. For more information or to sign the online guest book go to www.EighnerFuneralHomes.com Turner-Eighner Funeral Home 13160 Rt 34 W ~ P O Box 404 Somonauk, IL 60552 (815) 498-2363

Donald (Don) Lee Henry, 80, of Sandwich, IL, passed away on August 8, 2020 at his home surrounded by his family. He was born on February 14, 1940 in Oak Park, IL the son of Elmer Ellsworth Henry Jr. and Grace Marie (Ryan) Henry. He married... View Obituary & Service Information

The family of Donald "Don" Lee Henry created this Life Tributes page to make it easy to share your memories.

Send flowers to the Henry family.