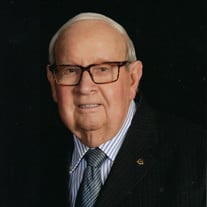 Donald R. Abel, 90, of Sandwich, Illinois, passed away Wednesday, December 5th, 2018. He was born July 22, 1928, in Aurora, Illinois, to John and Anna (Holldorf) Abel. Donald loved doing things in the outdoors. His favorite activities included camping, canoeing, fishing, bike riding, and walking for exercise. He loved gardening especially. He planted flower gardens around his home, and particularly enjoyed vegetable gardening. He loved antiques. He had many antiques that originated from his ancestors before him. Don was also artistic. He loved woodworking, carving, designing his own pieces of furniture, etc. If there was a problem that needed to be solved, many times he solved them with wood, building shelves or other items to suit many purposes. He took acrylic painting classes and became good at that. Perhaps his greatest accomplishment was designing and building his family a camper that was used to travel to many different areas of the country for years. Dad spent many years compiling ancestry information, and completed a very detailed family tree, which he shared with his family members. He loved his family and his friends. When he was young, he worked for Stephens-Adamson, a division of Allis-Chalmers, part of the United Auto Workers, as an inspector, in Montgomery. When his company folded, Dad did not become discouraged. He decided to start his own business, painting and wallpapering for homeowners all over the area. At approximately the age of 75, he retired from that for good. Even so, previous customers continued to call for quite some time. Dad began to slow down approximately a year and a half ago. He began attending Fox Valley Older Adults Services in Sandwich, and just loved socializing with his many friends there. A sincere thank you to all the folks there that kept him happy, and likely living longer than he might have. Thank you also to the transportation and meal service workers there! Don also, for many years, helped the quilting group at his church, St. John’s Lutheran Church in Somonauk. He cut literally thousands of squares of fabric that would later become quilts over the 20 years he volunteered. He was heavily involved in a great many other volunteer activities there also, including deacon, usher, and Bible reader. Dad was very healthy until nearly the end. He was able to stay at his little home in Sandwich without assistance until the night he called and walked out of his home to an ambulance in October. He proudly told nurses and CNA’s at Hillside Nursing Home in Yorkville that he still had all his own teeth! His stay at Hillside lasted less than two months. Thank you to the compassionate nurses and other healthcare workers that cared for him until the end, including Unity Hospice of Western Illinois, LLC. And then, Dad went home to Jesus. Donald was preceded in death by his parents, his brother John, who died in a submarine along with his entire crew during WWII, his sister Helen and brother-in-law Kenneth Herman, of Somonauk, his sister Annette and brother-in-law Henry Banser, of Aurora, his sister Lydia and brother-in-law Clarence Schilling, of Wilmington, and his brother-in-law Robert Moser of Oswego. He is survived by his daughter Cynthia and her husband, Richard Mueller of Plano, his daughter Peggy and her husband, Wes Bettcher of Lynchburg, Virginia, and his son Paul Abel and special friend Mila Dungca of Hoffman Estates. He is also survived by one sister, Lois Moser, of North Aurora, and the mother of his children, Margaret Jarzombek, of Yorkville. He leaves behind five grandchildren, Briana (Cody) Beck, of Surprise, Arizona, Joel (Holly) Parker, of Lee’s Summit, Missouri, and Gerrod Mueller, of Plano, Illinois, Stephanie (Chris) Owens, of Nashville, Tennessee, and Nathaniel (Haley) Bettcher, of Springdale, Arkansas. He also leaves behind nine great-grandchildren including Troy and Daniel Schindlbeck, Vincent Humpage, Tristan, Heaven, and Xavier Settle, and Nolan, Violet, and Lilly Parker. And many nieces, nephews, and good friends. He will be missed greatly. A memorial for Don will take place New Year’s Eve morning, December 31st, beginning at nine o’clock, at Turner-Eighner Funeral Home in Somonauk. Visitation will take place until the service at 11:00. After the service, there will be a brief graveside service at St. John’s Lutheran Cemetery in Somonauk. A luncheon will be served at St. John’s Lutheran Church immediately following the graveside service. Please come help us celebrate our loving Dad’s life! A great big thank you to everyone who befriended and loved our dad! For more information or to sign the online guest book, go to www.EighnerFuneralHomes.com Donations may be made to The Lutheran World Relief quilt ministry at St. John’s Lutheran Church. Quilts in this project are made to help needy children all over the world. Or, donations can also be made to Fox Valley Older Adults Services, in Sandwich. Both of these organizations contributed equally and greatly to Dad’s quality of life in his older years. Thank you! Turner-Eighner Funeral Home 13160 Rt. 34 W ~ PO Box 404 Somonauk, IL 60552 815-498-2363

The family of Donald R. Abel created this Life Tributes page to make it easy to share your memories.

Send flowers to the Abel family.