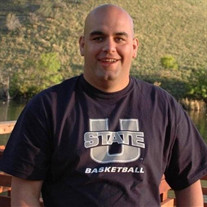 Derick Earle, 35, of Logan, Utah passed away suddenly and unexpectedly from complications of an enlarged heart on Monday, December 23, 2019 at Valley West Northwestern Hospital in Sandwich, IL. He was born August 14, 1984. He was adopted by John M. and Sandra S. (Chancy) Earle of Leland. He was a member of the Church of Jesus Christ of Latter-Day Saints. Derick moved from Illinois to Utah after serving a mission for the Church of Jesus Christ of Latter-Day Saints. Derick loved living in Utah. He lived with Paula and Ray Kaighn for over ten years and saw them as his family. Derick used his patient and easy going nature to work with students with special needs and he truly enjoyed making a difference in their lives. He had a rich life that included a large extended family from his church, work, and Aggie communities. He was a super fan of the USU Aggies and was featured in CNN’s 2019 Sport’s Pictures of the Year, showing his support for his favorite team. He met people wherever he went and continued to grow those relationships through his kind and genuine personality. He was loved and respected by all who knew him and he will be deeply missed. He is survived by his loving family, Sandy Earle, John and Becky Earle, Tarali and Michael Schaumberger, Wayne and Julie Earle, Brianna and Brad Loveridge, Haley Earle and Derek Day, Kaitlin and Allison Schaumberger, Brian and Nicole Earle, Matt and Laura Earle, Jennifer, Adam, Eric and Amy Earle, six great nieces and nephews, his close and dear friends Patrick and Amanda Torman, Dave and Carin Young, Jason and Tasha Yunker and his Utah family for almost ten years, Ray and Paula Kaighn, as well as the entire Utah State University Athletics Programs. He was preceded in death by his father, John M. Earle in 2018. Funeral services will be held at 11:00 a.m., Saturday, December 28, 2019 at Turner-Eighner Funeral Home in Somonauk, IL. Burial will follow in Elerding Cemetery in Sheridan, IL. Visitation will be from 9:00 a.m. until the time of service at 11:00 a.m. Saturday in the funeral home. In Lieu of flowers memorials may be directed to the family to be divided among his favorite charities. Turner-Eighner Funeral Homes 13160 Rt 34 W ~ P O Box 404 Somonauk, IL 60552 815-498-2363

Derick Earle, 35, of Logan, Utah passed away suddenly and unexpectedly from complications of an enlarged heart on Monday, December 23, 2019 at Valley West Northwestern Hospital in Sandwich, IL. He was born August 14, 1984. He was adopted... View Obituary & Service Information

The family of Derick J. Earle created this Life Tributes page to make it easy to share your memories.

Derick Earle, 35, of Logan, Utah passed away suddenly and unexpectedly...

Send flowers to the Earle family.