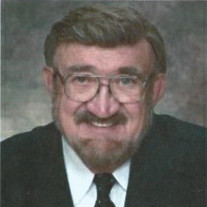 Dennis Stoia, 92, long time Somonauk resident passed away on Friday July 2, 2021, at OSF Richard L. Owens Hospice Home in Peoria. Dennis was born on December 31, 1928 in Aberdeen, S.D. His parents John and Seana Stoia (Biliboca) were immigrants from Drăguș Village, Romania. After graduating Aberdeen High School, he enlisted the U.S. Army. He served in post-World War II Japan. He again served during the Korean War with 86th Engineer Search Light Company. Dennis studied Industrial Engineering at The Ohio State University. Upon graduation, he moved to Chicago and worked for the Sunbeam Corporation as an engineer. He obtained a MBA from University of Chicago. He then worked for Aerosol Research as the V.P of Manufacturing. Dennis married his beloved wife Margaret “Peggy” Tyne in 1974. They made Somonauk their home and raised their son. In 1979, Dennis joined Northern Illinois University. He stayed at NIU until his retirement in 2002. He worked in a variety of jobs including instructor, associate professor, department chair, and associate dean of engineering. He loved helping students map the path to their degree. He could never fully retire. He continued to work part time as a labor arbitrator, hearing cases all over the U.S. He worked his last case at the age of 90. He is survived by his son; Justin (Jenna) Stoia, Dunlap, IL; grandsons Matthew, Thomas, and Patrick Stoia all of Dunlap, IL; sister, Mary Jane Hotopp of Sandwich, IL. He was preceded in death by his parents; his wife; brothers, John Stoia, Viorel Stoia, George Stoia; sisters, Lenora Sweet, Olivia Javoroski; granddaughter, Gianna Stoia. Visitation will be from 4:00 p.m. to 7 p.m. on Friday July 9, 2021 at Turner-Eighner Funeral Home in Somonauk. Funeral Mass will be held at 10 a.m. on Saturday, July 10, 2021 at St. John the Baptist Catholic Church in Somonauk, with Father Kevin Butler officiating. Burial will follow at Oak Mound Cemetery in Somonauk. Memorials may be directed to the charity of one’s choice. For more information or to sign the online guest book go to www.EighnerFuneralHomes.com Turner-Eighner Funeral Home 13160 W. RT ~ Box 404 Somonauk, IL 60552 (815) 498-2363

The family of Dennis V. Stoia created this Life Tributes page to make it easy to share your memories.

Send flowers to the Stoia family.