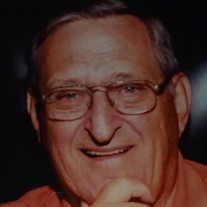 Not sure what to send?

Dennis Lee O’Connell, 84, of Lake Holiday, Sandwich, IL passed away Thursday, May 5, 2022 at Anthology of Wheaton in Wheaton, IL surrounded by his loving family. He was born May 6, 1937 in New London, WI the son of Raymond and Helen (Worm) O’Connell. Dennis married Phyllis C. Shrago Roth on December 17, 1981 in Wheaton, IL. He served in the U.S. Army during the Korean War. He graduated with a Doctorate in Education from the University of Ohio. He served the community of Roselle, IL for more than 30 years as a middle school Principal and Superintendent of Schools. After retirement he went on to work for the DuPage County Regional Office of Education as a consultant. He was still working until his cancer diagnosis in July. Dennis was a community leader throughout his entire life serving as president and board member for many organizations including Schaumburg Rotary Club, Roselle and Somonauk Lions Clubs, Somonauk Fire District Board, Ray Graham Association, and Fox Valley Older Adults. He is survived by his wife Phyllis; two sons, John O’Connell of Villa Park, IL and Jeffery (Barbara) O’Connell of Winfield, IL; two step-children, Dana Roth of Boston, MA, and David (Lauren) Roth of Dallas TX; five grandchildren, Grant, Mark, and Abby O’Connell, Julia and Olivia Roth; two sisters, Janice (Roger) Robley of Two Rivers, WI , and Marlene (Oliver) Wright of Keysville, VA; one niece, Susan (Tony) Sachse, one nephew, Christopher Robley and his beloved Black Lab, “Buddy.” He was preceded in death by his parents. The family would like to thank the doctors and nurses at Northwestern Medicine along with the staff of Anthology of Wheaton and Heartland Hospice. Visitation will be from 12:00 noon to 2:00 p.m. on Saturday, May 21, 2022 at Turner-Eighner Funeral Home in Somonauk, IL. Funeral services will follow at 2:00 p.m. in the funeral home. Burial will be at Oak Ridge Cemetery in Sandwich, IL. In lieu of flowers, memorials may be directed to Fox Valley Older Adults or the Open Door Rehabilitation Center. For more information or to sign the online guest book go to www.EighnerFuneralHomes.com Turner-Eighner Funeral Home 13160 W. RT 34 ~ Box 404 Somonauk, IL 60552 (815) 498-2363

Dennis Lee O&#8217;Connell, 84, of Lake Holiday, Sandwich, IL passed away Thursday, May 5, 2022 at Anthology of Wheaton in Wheaton, IL surrounded by his loving family. He was born May 6, 1937 in New London, WI the son of Raymond and Helen... View Obituary & Service Information

The family of Dennis Lee O'Connell created this Life Tributes page to make it easy to share your memories.

Send flowers to the O'Connell family.