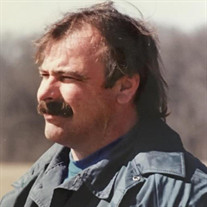 Dennis Fritzsche, 62, of Somonauk, formerly of Springfield, unexpectedly passed away Sunday, October 18th, 2020 in Sandwich, IL. Dennis is survived by his wife, Sally; his children, Shaun, Eric, Jenny, and Kc, as well as 4 grandchildren Lucy, Tinley, Hudson, and Penny. Dennis was born in Mt. Olive, Illinois in 1958 to Adrian and Christine Fritzsche. He grew up in a busy house with 11 siblings: Carol, Kathy, Joan, Jeanne, Catherine, Debra, Diane, Ken, Tim, Kevin, and Jimmy. As a star football player in high school (probably), he aspired to a career in football (maybe?). He was a collegiate athlete at Carroll College before transferring to Southern Illinois University in Edwardsville for graduation. Following graduation, he married the beautiful Sally Pingolt of Staunton, Il. Dennis spent the next 30 years of his life working as a federal agent and raising a small herd of Fritzsches. Among other notable achievements, he worked security at the 1996 Olympics, served in Afghanistan training military police, and rescued/ raised pug dogs (Frodo, Pippen, Rocky). After his retirement in 2013, you could find Dennis and his best friend Frodo (pug) exploring the country, eating cheese and snacks. In addition to his pugs, he also loved his family and arguing on the internet. Among his many talents, Dennis was an acclaimed (by his children) chef, with such specialties as Grilled Cheese and tomato soup, big sandwich™, ricotta shells, and pizza A memorial ceremony will be held in Springfield in Spring 2021. Turner-Eighner Funeral Home 13160 Rt 34 W ~ P O Box 404 Somonauk, IL 60552 (815) 498-2363

The family of Dennis Fritzsche created this Life Tributes page to make it easy to share your memories.

Send flowers to the Fritzsche family.