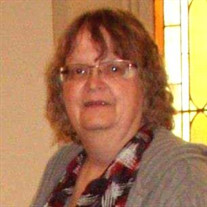 Deborah “Debbie” S. Matthews, 64, of Sandwich, IL, passed away Saturday, September 21, 2019 at her home. She was born October 5, 1954 in Aurora, the daughter of Donald and Florence (Boll) Miller. After Florence passed in 1954, Donald married Ruth Brodie, who gladly stepped into her role as mother to Deb. Debbie graduated from Somonauk High School and grew up working at Miller’s Foods with her dad. She was a lifelong member of Union Congregational Church in Somonauk, where she played the organ and piano for over 30 years. Deb was also the Director of Music and Choir Director at UCC. She taught music for 11 years, K-12 for Somonauk School District. Deb then went to work at the Somonauk Post Office. Where she spent 30 years, 27 of which she was a mail carrier for RR1 and retired on Halloween of 2018. Deb coached T-ball, soft ball, and AYSO soccer. She was a Girl Scout Leader for 10 years. Deb was a member of the Sunshine Band, Indian Valley Theatre. She was very active in the American Poolplayer’s Association, where she was a team captain and player. Deb was the pianist for the Community Choir. Deb was the State Chaplain for her union, ILRLCA for 25 years. She was the Secretary- Treasurer for the DeKalb County RLCA and a National Delegate for her state. Debbie attended annual state conventions as well as national conventions. Debbie played piano or organ for numerous weddings and funerals. She enjoyed reading, playing bingo, shooting pool, watching crime drama, but must of all she loved spending time with her family and friends. She is survived by three children, Alicia (Dave Jochum) Matthews, Brenton (Yolanda Villa) Matthews, and Chelsea (Andrew Paisley) Matthews; five grandchildren, Addisyn, Elizabeth, Alexis, Raven, and one expected in January; her siblings, Peggy (Tim) Ruegg of Seward, NE, Rhonda (Merideth) Sears of Charleston, SC, and Bradley Miller of Yorkville, IL; her Aunt Carol Larson of Somonauk, IL; dozens of nieces, nephews, cousins, and many friends. She was preceded in death by her parents, her step-mother, an infant sister, her grandparents, and her Aunt Wilma Brady of Quincy, IL. Funeral Service will start promptly at 11:00 a.m. on Friday, September 27, 2019 at Union Congregational Church in Somonauk, with Rev. Theodore Engelsdorfer officiating. Burial will follow at Oak Ridge Cemetery in Sandwich, IL. Visitation will be from 4:00 p.m. to 8:00 p.m. on Thursday, September 26, 2019 at Turner-Eighner Funeral Home in Somonauk, IL. In lieu of flowers, memorials may be directed to the UCC of Somonauk’s Music Department. For more information or to sign the online guest book, go to www.EighnerFuneralHomes.com Turner-Eighner Funeral Home 13160 Rt 34 W ~ PO Box 404 Somonauk, IL 60552 815-498-2363

The family of Deborah "Deb" S. Matthews created this Life Tributes page to make it easy to share your memories.

Send flowers to the Matthews family.