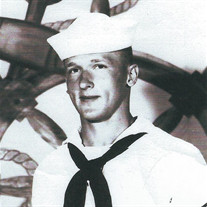 David Hunter Westbrook, 86, of Somonauk, IL was called home to be with his Savior on June 24, 2019. Dave attended Somonauk high school, where he played baseball and was a member of a state bound basketball team. Following high school, Dave enlisted and served in the Navy during the Korean War. During his 10-year tour, including active and reserve duty, his ship, the USS Robinson, sailed around the world. Dave worked with his dad and brothers Dick and Bill at Wesco Gas which distributed propane gas. Dave’s oldest son, Jeff, fondly remembers riding along with his dad as he delivered gas, sometimes late at night as his customers discovered they had run out of gas. Dave later operated the DH Westbrook Grain elevator in Sandwich. Dave’s son Dana loved seeing his Dad at the elevator so much he walked from Somonauk to Sandwich when he was 5 years old. Janice also loved to be with her dad at work. She was determined to run away one day. Without mom’s knowledge, Dave picked up her daughter in his grain truck and she rode with him to drop his load at the Ottawa River terminal. Dave later worked as a custodian and bus driver at Leland School. He worked for 27 years at the school until his retirement in 1996. Dave and his wife June (nee Scheppele) knew each other since grade school and started dating shortly after high school. They had been married for 66 years and raised three children. Family vacations included travels to Iowa to visit June’s relatives and family camping trips to Wisconsin, Minnesota and Dave’s favorite Colorado. Dave served as a Sunday School teacher and led congregational singing at 1st Baptist church in Somonauk. He also attended Plano Bible church which is now Village Bible church. Dave liked his sweets. Kids would flock to him after church services. They knew Dave would have candy for them. M & M’s were his favorite treat to hand out. Dave is also remembered as having a great laugh and being silly with his grandkids. Dave enjoyed woodworking and had a special place in his heart for animals, especially cats. Dave was preceded in death by his parents, Bill and Mildred Westbrook; brothers Charles, Dick, and Bill; and sisters Kathy and Margaret (Bill) Hedreen. Surviving are his wife, June (nee Scheppele) of Somonauk; children Jeff (Kathy) of Shabbona, Janice of Rochelle, Dana (Reba) of Earlville; grandchildren, Jeremy Westbrook, Jennifer (Jared) Yaggie, Kristen (Jacob) Mathre, Jake Kiefer, Alex Kiefer, Christina (Jim) Widman, and Ashley Newlun; honorary grandson Zachary Williams; great-grandchildren, Payton Yaggie, Autumn and Adaline Mathre, and Hailey and Maci Newlun ; also surviving are sister-in-laws Betty and Cindy Westbrook ; and many nieces, nephews, cousins, and friends. We would like to thank everyone who kept Dave in their thoughts and prayers. Special thanks to the exceptional staff and hospice care at Heritage Health. Visitation: Friends may visit on Friday, June 28, 2019 from 4:00 p.m. to 8:00 p.m. at Turner-Eighner Funeral Home, Somonauk Funeral: Funeral Service will be held on Saturday, June 29th at 11:00am, at Village Bible Church - Plano campus, with Pastor Steve Lombardo, officiating. Burial will be Oak Mound Cemetery, Somonauk. For more information or to sign the online guest book, go to www.EighnerFuneralHomes.com Turner-Eighner Funeral Home 13160 Rt 34 W ~ PO Box 404 Somonauk, IL 60552 815-498-2363

David Hunter Westbrook, 86, of Somonauk, IL was called home to be with his Savior on June 24, 2019. Dave attended Somonauk high school, where he played baseball and was a member of a state bound basketball team. Following high school,... View Obituary & Service Information

The family of David "Dave" Hunter Westbrook created this Life Tributes page to make it easy to share your memories.

David Hunter Westbrook, 86, of Somonauk, IL was called home to...

Send flowers to the Westbrook family.