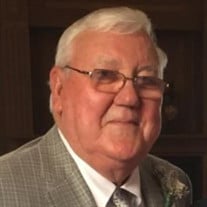 Darrell Lynn Wesson of Sandwich, IL, passed away February 13, 2022, following a brief illness. He was born June 11, 1938, a son of S. Darrell and Gladys (Cortright) Wesson. On July 5, 1957, he married Phyllis Jane Crutchmer of Okmulgee, OK, whom he met in an economics class while both were students at the University of Illinois in Urbana-Champaign. Lynn grew up on a farm south of Sandwich and enjoyed ice skating on the farm pond with a group of friends before school. Afterward everyone would head to the house for hot chocolate and homemade iced cinnamon rolls his mother had made. He always looked forward to the Sandwich Fair and once won a race while riding a camel. While still in high school Lynn began growing tomatoes for the Campbell Soup Company as an FFA project and he eventually left farming to work for them fulltime as a supervisor at their mushroom farm in Brighton, Indiana. In the late 1970s he returned to Sandwich and built six mushroom houses and converted the existing barn into a packing area and sales office. Mar-De-Ka mushrooms were sold to several area restaurants and grocery stores before the business was lost in an electrical fire. Lynn then worked for several years as a groundskeeper at Edgebrook Country Club before leaving to become Superintendent of Golf at Phillips Park in Aurora until his retirement on Lynn Wesson Day in August 2003. He was an active member of the Midwest Association of Golf Course Superintendents and spent his retirement playing golf as well as euchre and cribbage. Lynn also amassed an extensive collection of toy farm machinery by attending weekend farm toy shows throughout Northern Illinois and Southern Wisconsin. He is survived by his wife Jane and their daughters: Margaret (Gary) Lane of Newark, DE; Debora (Warren) Hayden of St. Louis, MO; and Katherine (Charles) Breuninger of West Grove, PA, as well as 8 grandchildren and 9 great-grandchildren. He was preceded in death by his parents, his brother Dexter (Sharon), and his sister Janet (“Duke”) Fanning. Visitation will be held at Turner-Eighner Funeral Home in Somonauk on Friday, February 18, 2022 from 10 a.m. to 11:30 a.m., with the funeral immediately following. Burial will be in Victor Cemetery, Leland. In lieu of flowers memorials may be made to Victor Cemetery 2675 Leland Road Leland, IL 60531. For more information or to sign the online guest book please go to www.EighnerFuneralHomes.com Turner-Eighner Funeral Home 13160 W. RT34 ~ Box 404 Somonauk, IL 60552 (815) 498-2363

The family of Darrell Lynn Wesson created this Life Tributes page to make it easy to share your memories.

Send flowers to the Wesson family.