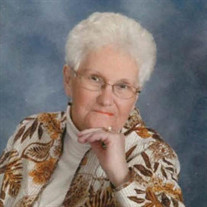 Darleen Jean Hozie passed away at the age of 90 on February 16, 2022 in Carrrollton, Texas, after a short illness. She had moved to Texas recently to live with her daughter Debbi, but before that was a lifelong resident of Dekalb and LaSalle counties in northern Illinois. Darleen was born in 1931 to H. Dewey and Emily (Appel) Walley of Sandwich, IL. She graduated from Sandwich High School in 1949, and in 1951 she married William (Bill) Gunther. Darleen and Bill had five children: Mark (Dee Dee) Gunther of Roseville, CA; Robert Gunther of St. Louis, MO; Debbi (Steve) Morgan of Roanoke, TX; Pam (James) Williams of Arlington, TX; and Kurt (Karen) Gunther of Woodstock, IL. She and Bill also had five grandchildren, Jason (Kim) Morgan, Aaron (Jacque) Gunther, Matthew Gunther, Amy Gunther and Zoe Gunther, and two great-granddaughters, Jaelyn and Elianna. Her husband Bill passed away in 1995. Sometime later, Darleen was surprised and delighted to meet the second great love of her life, Vernon Hozie. She and Vern married in 1997 and had many happy times together until Vern’s passing in 2001. Loved ones will remember Darleen for her energy, her creativity, her enjoyment of family and friends, and her mischievous sense of humor. She played high school sports and enjoyed roller-skating, bowling and golf. Darleen loved country life, and wherever she lived she made room for a large vegetable garden. Her pantry was always stocked for the winter with jars of her home grown, home-canned produce. She was an accomplished cross-stitcher and crafter—her lucky family received hand-made treasures from her every Christmas. Visiting her richly decorated home during holidays was a delight. Darleen was an incurable prankster and loved to play jokes on people--the sillier, the better. In her later years she thoroughly enjoyed family field trips to Walmart and the Dollar Store. While raising five children, Darleen also held many jobs to help support the family. She was a bookkeeper for the Ford dealership in Sandwich, a cook for Somonauk schools, an assembler at CTS Knights in Sandwich, a store clerk at Bud’s Citgo gas station in Somonauk and a dietary aide at Shabbona Nursing Home. A longtime member of St. John’s Lutheran Church in Somonauk, Darleen sang in the choir and was active in her ladies’ circle. She enjoyed spending time with her many friends, including a card club that met for decades. Darleen was preceded in death by her parents, her husband Bill, her husband Vern, and three brothers, Harlow, Bruce and Harlan. Funeral services will be held on Friday, April 29 at 10:30 a.m. at St. John’s Lutheran Church in Somonauk, IL, with Pastor Christine Schoon officiating. Burial will follow at St. John’s Lutheran Cemetery in Somonauk, followed by a reception at St. John’s Lutheran Church. Memorials in Darleen’s name may be made to the Open Door Rehabilitation Center in Sandwich, IL. For more information or to sign the online guest book go to www.EighnerFuneralHomes.com Turner-Eighner Funeral Home Somonauk, IL 60552 (815) 498-2363

Darleen Jean Hozie passed away at the age of 90 on February 16, 2022 in Carrrollton, Texas, after a short illness. She had moved to Texas recently to live with her daughter Debbi, but before that was a lifelong resident of Dekalb and LaSalle... View Obituary & Service Information

The family of Darleen Jean Hozie created this Life Tributes page to make it easy to share your memories.

Send flowers to the Hozie family.