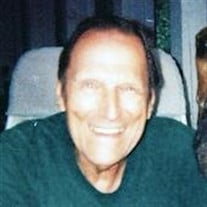 Conrad Michalowski, 91, of Sandwich, IL passed away Friday, July 19, 2019. He was born November 14, 1927 in Chicago, IL the son of Martin and Stephanie (Kozak) Michalowski. He married Alice Joan Skorusa on May 22, 1954. Fluent in Polish, he became the recording Secretary of the Polish National Alliance (PNA) at the age of 16. When he turned 18 he joined the US Army, where he proudly served in Germany during WW II as a special agent in the Counter Intelligence Corps in with Henry Kissinger. He graduated with a Bachelor’s Degree in Civil and Structural Engineering. In 1963 he was awarded a patent for a coolerator to be used in the foundry industry. He was a member of St. John the Baptist Catholic Church in Somonauk, IL., was a life member of the Sandwich VFW, President of the American Foundry Association, served on the Executive Board of Alexander Graham Bell Association for the Deaf, and served on the Board of Directors of Lake Holiday Properties Association. Conrad was an impressive athlete throughout his life. In the 1950’s he played for Wrights AC in Chicago’s 16” softball league, where as a shortstop, he led his team in singles, doubles and RBI’s, helping to win the league championship in 1950. An avid tennis player, he played in many USTA tournaments at the 4.0 level, winning several tournaments, including the 4.0 Illinois State Championship in 1985 and 1986. He is survived by his wife Alice; two daughters, Cheryl Frances (Tom Yoder) Michalowski of long Beach, CA, and Julie Ann (James) Servilla of Fairfield, CT; two sons, Stephen (Cheryl Ann) Michalowski of Campton Hills, IL, and David (Sheryl Nan) Michalowski of Baltimore, MD; five grandchildren, Stephen Jr., Travis, Alexandra, Shayna and Aaron; one great grandson, Mason. He was preceded in death by his parents, one son Geofrey, and one sister Lola Pestka. Conrad was a force of will and determination that defined his generation. He will be loved and remembered for all that he did to make our lives the success that they are. Funeral Mass will be held at 10:00 a.m., Friday, July 26, 2019 at St. John the Baptist Catholic Church in Somonauk, IL, with Father Kevin Butler officiating. Burial will follow in St. John Catholic Cemetery, Somonauk. Visitation will be from 4:00 to 7:00 p.m., Thursday, July 25, 2019 at Turner-Eighner Funeral Home in Somonauk, IL, with the Rosary recited at 6:45 p.m. Memorials may be directed to the Sandwich VFW or St. John the Baptist Catholic Church in Somonauk, IL For more information or to sign the online guest book go to www.EighnerFuneralHomes.com Turner-Eighner Funeral Home 13160 W. RT 34 ~ Box 404 Somonauk, IL 60552 (815) 498-2363

The family of Conrad Michalowski created this Life Tributes page to make it easy to share your memories.

Send flowers to the Michalowski family.