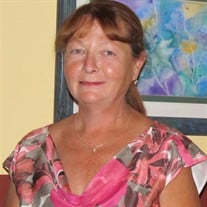 Claire Thompson Anders, age 64, passed away unexpectedly in her home in Leland, Illinois on July 2, 2020. She was born on September 27, 1955, in Berwyn, Illinois to Donald and Margaret Anders of Clarendon Hills, the youngest of three daughters. Claire attended grade school in Clarendon Hills and graduated from Hinsdale Central High School in 1973. She was a Spanish major at the University of Illinois in Chicago where she was active in athletics. Claire lived in Chicago for a number of years and worked as a legal secretary and in graphics. One of her proudest accomplishments was creating an extensive catalog for photographic products company from scratch. Once she left the city, she returned to her hometown. While working as an estate manager from a 5- acre property in Burr Ridge, Illinois, a position that combined her love of gardens and animals, she met Mike Krienert, who she married in the estate garden on April 4, 2004. They moved to his home in Leland where she created her own extensive garden. Here she also began to indulge in her other love, creating jewelry, following in the footsteps of her father. Mike and Claire’s place became known as a cat haven, attracting many strays. Claire tamed the feral kittens and took them to another cat rescue where they could be adopted to loving families. Claire was a loyal friend to many, especially those whom she grew up in Clarendon Hills. She thrived on learning and was always quick to share things that interested her whether it be plants, gems, minerals, or sharing funny animal videos with her friends and family. It is acknowledged that she could make one laugh and cry in even measures. She was preceded in death by her parents and is survived by her husband, Michael Krienert, her sisters Sally (Richard Ehrlich) Donovan and Rita (Jeffrey) Hayes, nieces Anne Laschober and Jen Schebo, and great-niece Vivian Schebo. Plans for a memorial service will be posted at a later date. Donations in her memory may be made to Tails Humane Society, 2250 Barber Greene Road, Dekalb, IL 60115, [email protected] For more information or to sign the online guest book go to www.EighnerFuneralHomes.com Turner-Eighner Funeral Homes 13160 Rt 34 W ~ P O Box 404 Somonauk, IL 60552 (815) 498-2363

Claire Thompson Anders, age 64, passed away unexpectedly in her home in Leland, Illinois on July 2, 2020. She was born on September 27, 1955, in Berwyn, Illinois to Donald and Margaret Anders of Clarendon Hills, the youngest of three daughters.... View Obituary & Service Information

The family of Claire Thompson Anders created this Life Tributes page to make it easy to share your memories.

Claire Thompson Anders, age 64, passed away unexpectedly in her...

Send flowers to the Anders family.