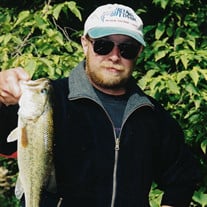 Chris Baumgartner, 52, of Lake Holiday, Somonauk, IL passed away suddenly on Thursday, April 22, 2021 at Kishwaukee Hospital in Dekalb, IL. He was born August 13, 1968 in Buffalo, NY the son of George W. and Nancy J. (Mazurek) Baumgartner. He married Sarah Haylett on June 25, 1994 in West Seneca, NY. He was a part of the Navy Reserves for 6 years. Chris loved to spend a day on the lake fishing, riding his motorcycle with friends, or being out in the woods camping. He was an extremely hard worker and was very dedicated to his career. Chris worked for Delta Sonic Car Wash for 34 years and was a Regional Vice President. He is survived by his wife Sarah Baumgartner of Somonauk, IL; three children Lee, Rachael, and Hollie Baumgartner of Somonauk, IL, his dog Lilah, his parents; one brother Greg (Laurie) Baumgartner, niece Paige, nephew Grayson of Amherst, NY, best friend Joseph Missana of Oswego, IL, father-in-law and mother-in-law Chris and Dorothy Askin of Glendale, CA, brother-in-law Ken Haylett, sister-in-law Linda Haylett-Quider of Albion, NY, and several nieces and nephews. Visitation will be from 3:00 p.m. to 7:00 p.m. on Thursday, April 29, 2021 at Turner-Eighner Funeral Home in Somonauk, IL. Brief prayers will be held immediately following visitation. A Memorial Service will be held at a later date in Buffalo, NY. In lieu of flowers, Memorials may be directed to the Family through https://www.gofundme.com/f/in-loving-memory-of-chris-baumgartner. For more information, or to sign the online guest book, please go to www.EighnerFuneralHomes.com Turner-Eighner Funeral Home 13160 Rt 34 W ~ P O Box 404 Somonauk, IL 60552 (815) 498-2363

The family of Christian "Chris" C.B. Baumgartner created this Life Tributes page to make it easy to share your memories.