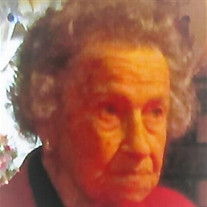 Charlotte Chastain Frein Gallagher, 97, of Somonauk, IL passed away Thursday, January 24, 2019 at Willow Crest Nursing Pavilion in Sandwich, IL. She was born August 19, 1921 in Decatur, IL to Charles and Jennie P. (Bailey) Chastain. She was the youngest of 8 children. Charlotte moved to the Sandwich, area in 1935 after the death of her father. She worked at Christensen’s Bakery, Zimmerman’s Café, Addie Oleher Hat Shop and did housekeeping for Webers. Charlotte met and married the love of her life Elmer Frein on November 29, 1939. They shared 26 happy years together until Elmer’s passing on December 29, 1965. They had 3 children; Emil, Mary Ann, and Cathy. Charlotte worked at the Egg Factory and was a waitress at the Sip N Snack Restaurant in Somonauk for many years. She was employed at CTS Knights Co. for 13 years. On May 7, 1977, Charlotte married John Gallagher. They enjoyed traveling, playing cards, eating out, sharing time with their family, and working at the farm until John’s passing in April 1983. Charlotte loved helping her family and others whenever they needed her. She enjoyed doing counted cross stich, hook rugs and working outdoors in her flowers. She was a member of St. John the Baptist Catholic Church and Sandwich Valley West Hospital Auxiliary. Charlotte is survived by her son Emil (Betty Fishburn) Frein of Fort Collins, CO, her daughters, Mary Ann (Don) Ehmke and Cathy (Ron) Muffler both of Somonauk, IL; 7 grandchildren, Lynette Ehmke of Houston, TX, Tim (Lori) Ehmke of Weatherford, TX, Brian (Betty) Frein of Palm Bay, FL, Keith (Jen) Frein of Evans, CO, Eileen (Eric) Clark of Loveland, CO, Ron (Silvia) Muffler of Katy, TX, Christine (Dave) Pritts of Somonauk, seven great grandchildren, and one great great grandchild, many nieces, nephews and friends. She was preceded in death by her parents, her husbands, Elmer and John, 3 brothers, Chalmer, Claud, and Emmitt; 4 sisters, Ruby Burton, Ruth Crawley, Violet Hildebrandt, and Mary Schade. Charlotte will be greatly missed by her children and grandchildren. Funeral Service will be at 11:00 a.m., Wednesday January 30, 2019 at Turner-Eighner Funeral Home in Somonauk, IL with Father Kevin Butler officiating. Burial will be at 1:00 p.m. on Friday, February 1, 2019 at St. John Catholic Cemetery in Somonauk, IL. Visitation will be from 9:30 a.m. until the service at 11:00 a.m., on Wednesday, January 30, 2019 in the funeral home. In lieu of flowers memorials may be directed to the charity of ones choice. For more information or to sign the online guest book go to www.EighnerFuneralHomes.com Turner-Eighner Funeral Home 13160 W. RT 34 ~ Box 404 Somonauk, IL 60552 (815) 498-2363

The family of Charlotte Chastain Frein Gallagher created this Life Tributes page to make it easy to share your memories.

Send flowers to the Gallagher family.