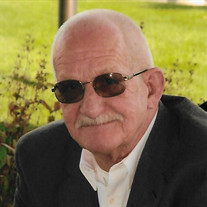 Charles A. “Buzz” Lindholm, 86, of Plano, IL. passed away Tuesday, November 9, 2021 at his home in Plano. He was born October 6, 1935, at home in Plano, IL. the son of Herman and Mary (Cheney) Lindholm. He married Sue Ann Meilinger on March 10, 1956, in Sandwich, IL. He went to Plano High School, while in high school he worked for Les Hill at the DX Station in Plano, IL. and then he went on to serve in the U.S. Army, from June 24, 1958, to June 23, 1960, as a 2nd Armored Division “Hell on Wheels.” After serving in the military, Buzz worked as a service station attendant and mechanic, as well as an agent for the Standard Oil Company in Plano, IL. He also worked for Davis Construction and Little Rock Township Highway Department serving as Road Commissioner for 30 years until his retirement. He was a volunteer fire fighter for Plano Fire Department which he also served as Fire Chief. He was one of the founding members that started the EMT of the ambulance service and the Little Rock Fox Fire Department Water Fighting Team. Every year he went musky fishing at Mudge Camp, Ontario Canada with his fishing pals. His greatest love of all was spending time with his family especially his grandchildren. He is survived by his wife of 65 years, one daughter, Jean (Alvin) Benson of Sheridan, IL.; four grandchildren, Emilie (Dan) Gallup of Sheridan, IL., Joseph (Brittany) Boring of Woodstock, IL., Michael (Tina) Benson of Serena, IL., and Kristine (Brent) Daggett of Yorkville, IL.; eight great grandchildren, Jayce, Corbin, Brandon, Collin, Austin, Noelle, Madysen and Luke; three great-great grandchildren, Braxton, Arabella and Owen; two sisters, Joanne Smith of Sandwich, IL. and Devonna Kensel of Plano, IL. and numerous nieces and nephews. He was preceded in death by his parents, infant daughter and an infant son, Charles August; one sister, Nancy Bradley and one brother, Jim “Wig” Lindholm. Services will be held on a later date. Memorials may be directed to Save the Windows at the United Methodist Church in Plano, IL. or the Little Rock Fox Fire Department District. For more information or to sign the online guest book please go to www.EighnerFuneralHomes.com. Turner-Eighner Funeral Home & Crematory 3952 Turner Avenue Plano, IL. 60552 (630) 552-3022

The family of Charles A. "Buzz" Lindholm created this Life Tributes page to make it easy to share your memories.

Send flowers to the Lindholm family.