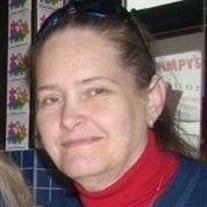 Carla J. “Fike” Glover, 56, of Somonauk, IL passed away, Thursday, July 19, 2018 at Rush University Medical Center in Chicago, IL. She was born December 28, 1961 in Sandwich, IL, the daughter of Ronald and Sally (Scent) Fike. She married Donald W. Glover on January 4, 1986 in Sandwich, IL. Carla enjoyed doing crafts, having coffee with her friends, traveling to Canada, and being with her cats. She especially loved spending time with her family. She is survived by her husband, Don of Somonauk, IL; one brother, Scott (Rita) Fike of Somonauk, IL; her mother-in-law, Irma Glover of Norway, IL; one brother-in-law, Ronald (Kim) Glover of Ottawa, IL; one sister-in-law, Cindy (Brent) Brooks of Twin Lakes, WI; two nieces, Nicole (Nathan) Wilkie and Crystal (Doug) Johann; one nephew, Branden Fike; her best friend, Wendy Leifheit and her sons, Matt and Paul. She was preceded in death by her parents and her father-in-law, Stanley Glover. Funeral Service will be held at 12:00 noon on Wednesday, July 25, 2018 at Turner-Eighner Funeral Home in Somonauk, IL. Burial will follow at Norway Cemetery in Norway, IL. Visitation will be from 10:00 a.m. until the time of service at noon at the funeral home in Somonauk, IL. For more information or to sign the online guest book, please go to www.EighnerFuneralHomes.com Turner-Eighner Funeral Home 13160 W. RT34 ~ Box 404 Somonauk, Illinois 60552 (815) 498-2363

The family of Carla J. "Fike" Glover created this Life Tributes page to make it easy to share your memories.

Send flowers to the Glover family.