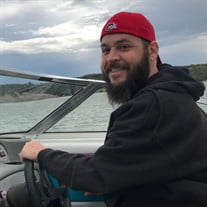 Brandon Rogers, 42, of Sioux City, IA passed away Thursday, August 16, 2018 at Central DuPage Hospital in Winfield, IL. He was born November 1, 1975 in Sioux City, IA the son of Rex E. Rogers and Karla S. (Burkhart) Johnson. He married Greta Jo Marienau on July 31, 2004 in Sioux City, IA. Before his illness, he was very proud to be the Area Plant Supervisor for Century Link in Sioux City, IA. He would try many new recipes and shared the meals with his grandmother. Brandon was a lifelong Chicago Bears fan and he also enjoyed the Blackhawks, Bulls, and White Sox. He also loved spending time with nature, boating and camping. Most of all, he loved spending time with his family, especially his children he was so proud of and his nieces and nephews that just made his day. He is survived by his wife, Greta of Sioux City, IA; one daughter, Bella; one son, Alex Rogers Waterloo, IA; his mother, Karla Johnson of Sandwich, IL; his father, Rex (Jo) Rogers of Green Valley, AZ; his maternal grandmother, Lois Burkhart of Sandwich, IL; three siblings, Heather Rogers of Yorkville, IL, Shanna (Brian Hyatt) Johnson of Houston, TX, and Amber (Sergio) Arenas of Norfolk, NE; two step-brothers, Ryan Potting of Yorkville, IL and Jason Johnson of Colorado Springs, CO; numerous aunts, uncles, nieces, nephews, cousins, and friends. He was preceded in death by his stepfather, Bill Johnson and stepbrother, Nelson Pottinger. Memorial Service will be held at 2:00 p.m. on Monday, August 20, 2018 at Burkhart-Eighner Funeral Home in Sandwich with Pastor Del Keilman officiating. Visitation will be from 10:00 a.m. to the time of service at 2:00 p.m. at the funeral home in Sandwich on Monday, August 20, 2018. For more information or to sign the online guest book, go to www.EighnerFuneralHomes.com. Burkhart-Eighner Funeral Home 606 E. Arnold Rd. Sandwich, IL 60548 815-786-2165

The family of Brandon Lee Rogers created this Life Tributes page to make it easy to share your memories.

Send flowers to the Rogers family.