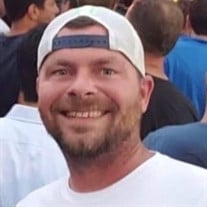 Brandon E. Land, 37, of Somonauk, IL passed away unexpectedly on Wednesday, January 12, 2022 at Rush Copley Medical Center in Aurora, IL. He was born December 25, 1984 in Sandwich, IL the son of Bradley D. Land and Vicki L. (Allen) Land. Brandon worked for MidAmerican Water in Aurora, IL for 18 years. He was an avid Bears, Cubs, and Blackhawk’s fan. Brandon enjoyed the outdoors especially spending time at his summer home in McNabb, IL. He loved fishing, gambling, playing darts, golfing, dancing, and singing. He enjoyed doing Fantasy Football yearly with his friends. Most of all he enjoyed spending time with his family, especially his nieces, and friends. His contagious smile and laugh will be missed by so many along with his cute butt chin. He is survived by his mother, Vicki Land of Mendota, IL; his brothers, Chad Land of Florida and Bradley Land of Somonauk, IL; one sister, Schyler (Joe) Munder of Somonauk, IL; his grandmothers, Doris Land of Somonauk, IL and Betty Allen of Plano, IL; his aunts and uncles, Kelly Johnson of Somonauk, IL, Debbie (Jim) Ammons of Nebraska, and Brenda (Jim) Austin of Earlville, IL; and his three nieces that he adored very much, Jaidynn, Jocelynn, and Jacquelynn; and numerous cousins and friends. He was preceded in death by his father, Bradley Land; his grandfathers, Harry Land and Paul Allen; and his Uncle Tom Allen. Funeral Service will be held at 10:00 a.m. Wednesday, January 19, 2022 at Turner-Eighner Funeral Home in Somonauk, IL. Visitation will be from 3:00 p.m. to 7:00 p.m. on Tuesday, January 18, 2022 at the funeral home in Somonauk. In Lieu of flowers Memorials may be directed to the family. For more information or to sign the online guest book please go to www.EighnerFuneralHomes.com Turner-Eighner Funeral Home 13160 Rt 34 W ~ P O Box 404 Somonauk, IL 60552 (815) 498- 2363

The family of Brandon Edward Land created this Life Tributes page to make it easy to share your memories.

Send flowers to the Land family.