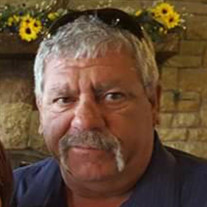 Brad Land, 59, of Largo, FL, formerly of Somonauk, IL, passed away suddenly on March 17, 2019. He was born September 9, 1959 in Aurora, IL, the son of Harry and Doris (Koch) Land. Brad loved riding his Harley Davidson, Jet skiing, and going to concerts. He drove a cement truck for many years. He is survived by his mother, Doris of Somonauk, IL; his four children, Chad and Bradley of Largo, FL, Brandon of Sandwich, IL, and Schyler of Mendota, IL; two granddaughters, Jaidynn and Jocelynn; two sisters, Kelly Johnson of Somonauk, IL and Debbie (Jim) Ammons of Omaha, NE; numerous nieces, nephews, cousins, and friends. He was preceded in death by his father, Harry Land. Memorial Service will be held at 11:00 a.m. on Saturday, March 30, 2019 at Turner-Eighner Funeral Home in Somonauk with Father Kevin Butler officiating. Burial will follow at West Serena Cemetery in Serena, IL. Visitation will be from 9:00 a.m. until the time of service at 11:00 a.m. on Saturday, March 30, 2019 at the funeral home in Somonauk, IL. Memorials may be directed to the family. For more information or to sign the online guest book, go to www.EighnerFuneralHomes.com Turner-Eighner Funeral Home 13160 Rt 34 W ~ PO Box 404 Somonauk, IL 60552 815-498-2363

The family of Bradley "Brad" Land created this Life Tributes page to make it easy to share your memories.

Send flowers to the Land family.