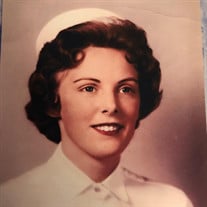 Betty Lou Pohl, 80, of Plano, IL. passed away Tuesday, October 12, 2021 at Willow Crest Nursing Pavilion in Sandwich, IL. She was born September 28, 1941 in Sandwich, IL. the daughter of Harley and Marjorie (Sampson) Baker, Sr. She married Harold F. Pohl on March 16, 1963 in Plano, IL. She was a member of the Untied Methodist Church in Plano, IL., graduated from Plano High School, class of 1959 and then went on to Copley Nursing School graduating in 1962. Betty Lou started her nursing career at Copley Hospital then relocating to Sandwich Hospital. After having her children, she stayed at home to care for them plus continued to still work part-time at Mercy Center and Sandhaven Nursing Home up until her retirement in 2003. She was a Girl Scout leader in Plano during the 1970’s for many years…she inspired many of her scouts to become nurses. She was a wizard at crafts. Betty Lou was extremely sympathetic to others concerns, very comforting to talk to and a matriarch to her cousins, their children, and grandchildren. She will be missed by many. She is survived by one daughter, Kandi Pohl of Plano, IL.; one son, Harold Scott Pohl of Plano, IL.; one sister, Linda (Donald) Baker-Casner of Golliad, TX.; two brothers, David (Kathy) Baker of Somonauk, IL. and Harley M. (Elaine) Fredrickson-Baker of Somonauk, IL.; two aunts, Louise Applequist of Boulder Hill, IL. and Lorene Johnson of TX. and several nieces and nephews. She was preceded in death by her parents, her husband, one sister in infancy Barbara Baker, one brother, Thomas Baker, five aunts, Dorothy Sampson, Eleanor Twait, Jean Brockman, Joyce Phillips, and Lucille Wade-Gardner, five uncles, Harvey Sampson, Arthur Baker, Orville Baker, Sr., Leo Baker and James Baker, one niece Debra Ann Baker along with several cousins. Private graveside services will be held at a later date. For more information or to sign the online guest book, please go to www.EighnerFuneralHomes.com. Turner-Eighner Funeral Home & Crematory 3952 Turner Avenue Plano, IL. 60545 (630) 552-3022

The family of Betty Lou Pohl created this Life Tributes page to make it easy to share your memories.

Send flowers to the Pohl family.