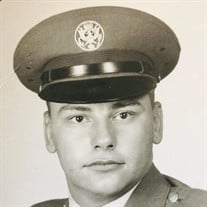 Bernard J. Krapausky, 73, of Sandwich, IL passed away, Friday, February 5, 2021 at his home in Sandwich. He was born February 19, 1947 in Kewanee, IL, the son of Bernard and Evalyn (Brazee) Krapausky. He married Diane Dobbs on January 21, 1967 in Alexandria, VA. Bernie was a proud veteran of the United States Air Force, serving during the Vietnam War era. He was a dedicated Husband, father, and grandfather. Watching his kids play sports was one of his favorite pastimes, and he loved the post-game debriefs. Bernie was known for his work ethic, which served him well when they owned a small family restaurant in Sheridan and worked as a supervisor within multiple companies. One passion Bernie enjoyed was drawing. He had an artistic soul and demonstrated it with family projects, and community projects, like wall murals in the school gym and in the Sheridan library. He was always happy to lend a helping hand to whomever needed it. Most of all, he enjoyed spending time with his family. He is survived by his wife, Diane, his children; Stephany (Bart) Johnson of Kennesaw, GA, Jason (Emily) Krapausky of Wheaton, IL, and Meagan (Evan) Burris of Byron, IL; four grandchildren, Macyn, Easton, Isabelle, and Kyra; one sister, Virginia (Joseph) Sherman of Somonauk, IL, and several nieces and nephews. He was preceded in death by his parents and three brothers: Paul, Tom and Mike “Turk” Krapausky. Per Bernie’s wishes, cremation rites were handled by Burkhart-Eighner Funeral Home in Sandwich, IL. A celebration of his life will take place at a later date. If anyone wishes to donate on his behalf, please visit www.parkinson.org. For more information or to sign the online guest book, go to www.EighnerFuneralHomes.com. Burkhart-Eighner Funeral Home 606 E. Arnold Road Sandwich, IL 60548 (815) 786-2165

Bernard J. Krapausky, 73, of Sandwich, IL passed away, Friday, February 5, 2021 at his home in Sandwich. He was born February 19, 1947 in Kewanee, IL, the son of Bernard and Evalyn (Brazee) Krapausky. He married Diane Dobbs on January 21,... View Obituary & Service Information

The family of Bernard J. Krapausky created this Life Tributes page to make it easy to share your memories.

Send flowers to the Krapausky family.