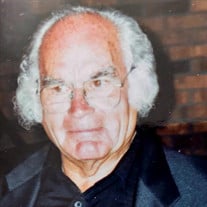 Aubria A. Saltzman, 95, of Somonauk, IL passed away Sunday, April 18, 2021 at Ottawa Pavillion in Ottawa, IL. He was born April 14, 1926 in Aurora, IL the son of Loren and Flora (Tinsley) Saltzman. He married Jeanne C. Hunger in 1948 in Aurora, IL. He was a Navy Veteran, serving in WWII. Aubria was a pastor for many years at Crosswords Ministry in Oswego, IL. Most of all he enjoyed devoting his time to studying the word of God and sharing the message of Chirst’s love for them with everyone he met. He is survived by one daughter-in-law Cathy Saltzman of Oswego, IL, one son-in-law Gerald Becker of Somonauk, IL; two grandsons Justin (Mirian) Becker of Leland, IL and Jason Becker of Somonauk, IL; two great grandchildren Christian and Abbie, one sister-in-law Donna Saltzman of Anderson, SC; and several nieces and nephews. He was preceded in death by his parents, his wife, one brother Wesley Saltzman, one sister Alberta (Ronald) Lowrey, one son Rick Saltzman, and one daughter Vickki Becker. Private Graveside Service will be held at a later date at Camp Butler National Cemetery in Springfield, IL. A Private Family Service will be held at a later date. According to Aubria’s wishes there will be no visitation, or service. Cremation rites were entrusted in Burkhart-Eighner Funeral Home in Sandwich, IL. For more information or to sign the online guest book go to www.EighnerFuneralHomes.com Burkhart-Eighner Funeral Home 606 East Arnold Road Sandwich, IL 60548 (815) 786-2165

The family of Aubria A. Saltzman created this Life Tributes page to make it easy to share your memories.

Aubria A. Saltzman, 95, of Somonauk, IL passed away Sunday, April...

Send flowers to the Saltzman family.