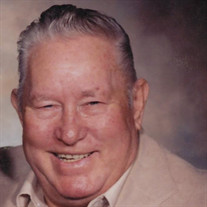 Arthur “Ed” Edward Turner, 87, of Harding, IL, passed away Monday, December 30, 2019 at OSF St. Anthony Medical Center in Rockford, IL. He was born March 2, 1932 in Rison, AR, the son of Jesse W. and Bertha V. (Clark) Turner. He married Kathleen J. Maloney on March 1, 1952 in Yuma, AZ. Ed was a proud member of the US Navy, serving as a Firefighter during the Korean War. Shortly after returning from Korean, Ed and Kathleen had a whirlwind meeting and were married just 3 weeks later. They spent 68, nearly 69 years together. He was a member of the VFW, American Legion, AMVETS, and the Fraternal Order of Eagles. Ed worked at Lyon Metal in Aurora for over 35 years, retiring in 1995. He enjoyed collecting antique clocks and was an avid hunter and fisherman. Ed was incredibly friendly, he never knew a stranger, only a friend he hadn’t met yet. He is survived by his wife, Kathleen of Harding, IL; one daughter, Eileen Turner of Justice, IL; two grandchildren, Kevin Edward McCradic of PA and Kelly Morgan McCradic of Chicago, IL; one brother, John W. (Judy) Turner of Fordyce, AR. He was preceded in death by his parents and his siblings, twin sisters in infancy, Virginia Connell, Mary Sims, and James Turner. Funeral Service will be held at 1:30 Friday, January 3, 2020 at Turner-Eighner Funeral Home in Somonauk, IL. Burial will follow at Harding Cemetery in Harding, IL. Visitation will be from 12:00 noon until the time of service at 1:30 p.m. at the funeral home in Somonauk. Memorials may be directed to Disabled American Veterans. For more information or to sign the online guest book, go to www.EighnerFuneralHomes.com Turner-Eighner Funeral Home 13160 Rt 34 W ~ PO Box 404 Somonauk, IL 60552 815-498-2363

The family of Arthur "Ed" Edward Turner created this Life Tributes page to make it easy to share your memories.

Send flowers to the Turner family.