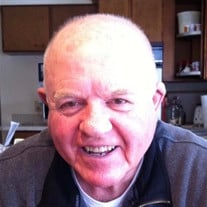 Armand H. “Shorty” Dannewitz, 87, of Somonauk, IL passed away peacefully Friday, April 12, 2019 at his home in Somonauk. He was born November 21, 1931 in Somonauk the son of Harry and Lillian (Johnson) Dannewitz. He met his first love, Joan Michael, in sixth grade and married her in 1952. He was an active member of St. John’s Lutheran Church of Somonauk, IL and a proud veteran of the United States Army. He spent his entire life farming and often said he never needed to gamble because he spent every day betting on the weather. In addition to the love of farming he sold DeKalb Ag seed corn for many years and was a Somonauk Township Road Commissioner for thirty years. Shorty was a man of many ideas, was always one step ahead, and the guy you would call when you needed help. Shorty enjoyed many years of sports as an accomplished athlete in softball, bowling, and golf. He cherished playing rounds of golf with friends at home and in Florida. In his later years he loved the companionship of his close friend Cindy Westbrook. On many occasions he told his family that he didn’t know how he got so lucky to receive the love of not one, but two wonderful women in his life time. He is survived by one son, Larry (Jackie) Dannewitz of Sandwich, IL; and one daughter Laurie (Thomas) Guest of DeKalb, IL. He was the proud grandfather to Lauren (Daniel) Hoyt, Andrew (Ashleigh) Dannewitz, Evan Guest and Ellie Guest. Three great grandchildren, Charlotte and Everett Dannewitz and Caden Hoyt, and many nieces and nephews. He was preceded in death by his parents, his wife Joan, six sisters and six brothers-in-law. The family would like to thank Dr. Erik Englehart and his staff, Northwestern DeKalb County Hospice for the amazing care provided. Funeral services will be held at 1:00 p.m., Friday, April 19, 2019 at St. John’s Lutheran Church in Somonauk, IL with Pastor Chris Schoon officiating. Private burial is planned at Oak Ridge Park Cemetery. Visitation will be from 10:00 a.m., on Friday, April 19, 2019 in the church until the time of service at 1:00 p.m. In lieu of flowers, memorials may be directed to the charity of your choice. For more information or to sign the online guest book go to www.EighnerFuneralHomes.com Turner-Eighner Funeral Home 13160 W. RT 34 ~ Box 404 Somonauk, IL 60552 (815) 498-2363

The family of Armand "Shorty" Dannewitz created this Life Tributes page to make it easy to share your memories.

Send flowers to the Dannewitz family.