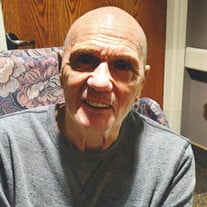 Allen Lee Bickett, 75, of Earlville, Illinois passed away Tuesday, August 24, 2021 at Pleasant View Luther Home in Ottawa, IL. He was born August 27, 1945 the son of Earl and Ann (Schwartz) Bickett. He married Pamela L. Maly on August 16, 2011 in Ottawa, IL. He enjoyed the outdoors, playing horseshoes, and tinkering with things. He was a former member of the Eagle’s Club in Aurora, IL and the Moose Lodge in Ottawa. Most of all he enjoyed spending time with his family and his many friends. He is survived by his wife Pam of Earlville, one daughter Catherine (Jeff) Paolillo of Florida and one son Alan ( Michelle) Bickett of Florida, his step children, Scott Keldie and William Edlemon. Several grandchildren and step grandchildren, one brother Larry (Mary) Bickett of AR, and several nieces and nephews and two special nieces Shellie Lynn and Sonia, and a special nephew John Bickett. He was preceded in death by his parents, one sister, Judy and one brother, Donnie. According to Allen’s wishes there will be no visitation or services because of Covid restrictions. A celebration of life will be held at a later date and will be announced on Facebook. Cremation rites were entrusted to Hanley-Turner-Eighner Funeral Home in Earlville, IL. In Lieu of Flowers please direct memorials to Pam to help pay the funeral. At 421 N. 3rd Street Earlville, IL 60518. All donations appreciated. For more information or to sign the online guest book go to www.EighnerFuneralHomes.com Hanley-Turner-Eighner Funeral Home 407 S. Ottawa St. ~ Box 808 Earlville, IL 60518 (815) 246-6491

The family of Allen Lee Bickett created this Life Tributes page to make it easy to share your memories.

Send flowers to the Bickett family.